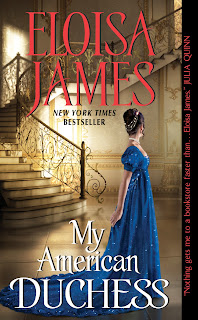 Where to begin on My American Duchess? Okay, the story can be broken up into two halves. We have the first half that focuses on Merry and her engagement on Cedric, while Cedric's brother pines over Merry. It's actually more than that. Merry is this vibrant American who is trying her hand at the season after all she jilted two betrothals. She's determine to stick with this engagement no matter what, even when she has doubts. Now Cedric is a sanctimonious prig. Basically, he's after Merry's dowry, but he spouts off inane stuff to woo her. At first, she falls for it. While he's at it, he pretty much paints his brother in a bad light. Now Trent is a Duke and falls for Merry, but finds out that she's engage to his brother. He tries to put her out of his mind. Yet, it doesn't work. We have this complication. I wouldn't say it's a love triangle cause Trent and Merry are better suited for one another, while his brother tries to make her English. Merry starts to realize that Cedric isn't a good match for her. Stubborn bastard. There is so much that goes on between this half. The dynamics of the story are powerful. I adore Merry during this time, because she strives to the ultimate american, even though she's faced with prejudice.

The second half of My American Duchess focuses on Trent and Merry and their marriage. It starts off a little rocky, but by the end of it works out. Trent wants to go about marriage a logical way, but Merry being herself can't really do that. However, she starts to mold herself to be the perfect English Duchess, and funny Trent has a hard time with this.

Overall, I did enjoyed My American Duchess. I adore Merry's spitfire and she's so American and I love that about her. As far as I know there isn't going to be story for Cedric, by the way I would love to see. At the end of the book we see that he changes drastically. At some parts of the story I wouldn't have been sad if he had died on his journey, because he was that horrible. I'm glad that My American Duchess ended up being a full novel instead of a novella, because it's complex storyline it would have been short changed had it been a novella.