Audiobook: All I Want by Jill Shalvis (Review) 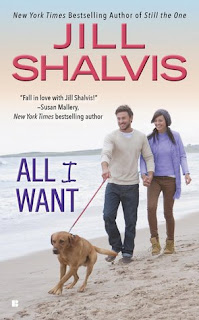 There is a downside to listening to an audiobook, actually a couple: 1) Spelling characters names right, because there can be so many variations and spelling that it could get ugly. 2) Quotes. There are some awesome quotes and unless I have a paper in front of me they aren't going to get down. However, All I Want is still a fantastic book. Seriously, can it get better than this? Technically it can, but we aren't going to focus on that. Oh no, we are going focus on the goodness of Parker and Zoe.

The last couple of books have been focusing on Stone family. Now everyone has moved out and Zoe is left with just a house. Granted everyone is still in Sunshine, but she's feeling like an empty nester and doesn't know what to do. So, when Wyatt asks if one of his buddies could stay with her, why not. The first time we meet Parker is hysterical. I mean Zoe totally mistakes him as her blind date and gives him a big old kiss. What a welcome. *Laughing hysterically* Anyway, I love Zoe. I mean she had to be the strong one when they were all growing up. Her parents were total flakes. Maybe not in the typical sense, but that their own self-importance was too much to take care of their kids. Basically, Zoe has made a fortress to protect her heart from anyone coming into radius. There is more about her fortress (of solitude). When Parker crashes into her life, he kind of turns it upside down.

Now Parker is married to his career. No one is getting in his area, because that carries too much risk. I love Parker, because he was able to get into Zoe's fortress. Even when he did handy stuff around the house, and he try to play it off that she did the job. Zoe's on to him.

HOLY MOLY do these guys get hot. Not kinky stuff, but a I need a little fan. There are some parts I'm blushing myself. Melt me into a puddle of goo. Parker is the total package, and he's trying to catch a bad guy too. This was time well spent. Plus, Karen still does an amazing job at reading All I Want. Now I totally want a story for Kel. He seems to strike out with the Stone girls. Darn it I want more Magnetism books, which I HOPE there is more. Anyway, a great time listening to All I Want.