Since the Surrender by Julie Anne Long (Review) 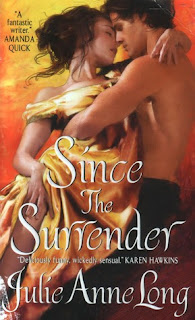 As you all know I have been making my way through Julie Anne Long's Pennyroyal Green books. I have finished the third in the series, which happens to be Since The Surrender. In this story we focus on Chase Eversea. Now, Chase might seem like a stick in the mud. Okay, he's a stick in the mud. However, he's loyal and dependable, which are very good qualities in a hero. We also meet Rosalind March. Rosalind has done everything to protect her sisters, even marry a man who was a bit older than her. Don't worry she did love her husband, so nothing that would cause shame in her marriage happen.

Anyway, Chase has been attracted to Rosalind, since she was a married woman and wouldn't cross the line he would get frustrated with her and himself. When she asks Chase for help he pretty much scoffs at her believing that her sister just ran off. Once you meet the younger sister at the end you are will be amaze that she's an airhead. Anyway, Chase finally helps Rosalind find her sister, and tries to fight the attraction between them.

We get to watch these to trying to stay focus on the task and at the same time fight the attraction. Overall, I enjoyed Since The Surrender, because you have witty banter going on between Chase and Rosalind. I did have a few chuckles as I read the book. By the end of the story had me sighing, because I enjoyed the journey.