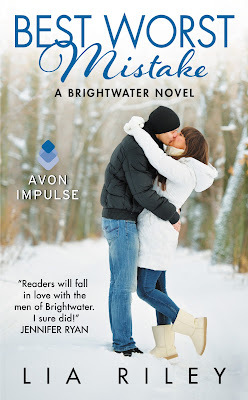 Sometimes the worst mistakes turn out to be the best…

Smoke jumper Wilder Kane once reveled in the rush from putting out dangerous wildfires. But after a tragic accident, he’s cut himself off from the world, refusing to leave his isolated cabin. When a headstrong beauty bursts in, Wilder finds himself craving the fire she ignites in him, but letting anyone near his darkness would be a mistake.

After her Hollywood life went up in smoke, Quinn Higsby decided to leave Tinseltown behind and returned to Brightwater to care for her ailing father. Spending her days in a small bookstore, her peaceful existence is up-ended by a fascinating but damaged man. Quinn is determined to not to be scared off by Wilder, not once she’s experienced the heat of his passions.

But when an arsonist targets the community and Wilder is accused, he must confront the ghosts of his past. Will his desire for Quinn flameout or will he be able to tame the wildness inside and rekindle a hope for their future?

My Thoughts:
I adore Brightwater books, because they are sweet, heartfelt, and bit magical. Okay, magical might be over doing it, but they are heartwarming stories. Anyway; today we are taking a look at Lia Riley's latest Brightwater book Best Worst Mistake. Let me just say this might sound like a falling off the beaten path, but stay with me. At first Best Worst Mistake kind of reminded me of the Disney version of Beauty and The Beast. Yep, you read that right. I'll explain why, and it's okay to totally disagree with me, I'm okay with that after all these are my thoughts. Here we go:

Wilder Kane: He's pretty beasty and antisocial after the fire accident. Plus, he has shut himself off from the rest of the world, living all alone in a cabin. His family would be like the objects that make his life comfortable.

Quinn Higsby: She's totally like Belle. She's beautiful and smart. Yes, they might find her a little cuckoo. However, she's sweet and tries to take care of her father who has early onset Alzheimers. Plus, she likes reading and heaven forbid a woman should start reading, and getting ideas in her head.

Garret: Oh my goodness, he's so much like Gaston it's not even funny. Totally believes he's like god's gift to women. Seriously, the guy couldn't understand why Quinn didn't like him that way.

Lenny: He's Garret's buddy and would do anything for him, sort of like Lefou.

There you have it the main characters of the story of Beauty and the Beast, I mean Best Worst Mistake. I liked this story and a modern retelling of Beauty and the Beast without the Stockholm Syndrome. Yep, Quinn isn't held captive against her will unless you count being stuck in a cabin with Wilder and her father during a blizzard. Anyway, Best Worst Mistake is a sweet story and heart melting. We have two characters that couldn't be more different. We have Wilder who is living with guilt and remorse for the past and trying to make amends for what happen. So, he puts on his grumpy pants so everyone can give him a wide berth. We have Quinn who is dealing with a lot on her plate and can't give anymore than she can. Yet, she opens up to Wilder.

So, if you are looking for something sweet and heartwarming, you can't go wrong with Best Worst Mistake. It will leave a smile on your face by the end.

“Would you do something for me?” She inched closer.
“What’s that?”
She patted the side of the bed. “Come here. Be next to me. We don’t have to sleep together to sleep together. Maybe I’m not ready to go whole hog, but what about cuddling?”
“Cuddling?” His breath sounded labored.
“Don’t be so dismissive.”
“I’m not, it’s just that … no one has ever asked me to before. I don’t exactly have a reputation as the warm and cuddly type.”
“Or no one’s ever bothered to look close enough.”
He froze before sitting on the edge of the bed, the mattress creaking from his weight.
“There we go, that’s a start,” she said encouragingly.
“Now what?”
“Now we both lie back on your pillows, get under the blankets.”
“What about shoes?”
“Right. Shoes. Very practical. Glad one of us handles the details. See? This is what makes me a terrible Virgo.”
“You nervous?” He slowly undid the zipper to her ankle boot, easing it off, giving her toes a squeeze before proceeding to the next boot. Her stomach muscles clenched. This guy would give amazing foot rubs; she knew it.
“A little, but in a good way.”
He considered her. “You’re strange.”
“And you are terrible at giving compliments.”
He chuckled at that, tossing her boots on the floor and pulling back the blankets, tucking her in.
“Aren’t you getting in too?”
“For my sanity, I’d rather have this as a barrier.” He tugged on the thick comforter, “Otherwise, I’ll never fall asleep.”
“Am I that hard to resist?” She batted her lashes with a faux-seductive voice.
“Woman, you drive me crazy.” But he sounded happy or at least not angry, which was a change. And for not being a cuddler, he had an excellent way of putting his arm around the hollow of her waist and spooning her against him.

Lia Riley writes offbeat New Adult and Contemporary Adult romance. After studying at the University of Montana-Missoula, she scoured the world armed only with a backpack, overconfidence and a terrible sense of direction. She counts shooting vodka with a Ukranian mechanic in Antarctica, sipping yerba mate with gauchos in Chile and swilling XXXX with stationhands in Outback Australia among her accomplishments.