Hi Melody! Thank you so much for having me as your guest today.
Oh, the rogue! Don’t we love him? At least between the pages of a book where we know he’ll end up devoting all that roguishness to one lucky woman by the end – even if he fights his fate tooth and nail, poor thing. Actually Camden Rothermere, the hero of WHAT A DUKE DARES (out 26th August), isn’t exactly a rogue, but he doesn’t welcome the vulnerability that comes with falling in love!

In honor of roguish heroes, I’m going to list my top 5 Regency rogues:

1. George Gordon, Lord Byron. Famously “mad, bad and dangerous to know,” Byron was the prototype for the Regency rake character so beloved of readers. His scandalous ways got so bad that he had to flee England for the Continent after a disastrous marriage and an affair with his sister. And he certainly didn’t change his behavior once he crossed the Channel. A man who burned bright but briefly, he died at the age of 36, fighting the Turks for the cause of Greek independence. Byron had brains as well as reckless physical courage and is still a compelling figure – I’m not surprised that the adjective Byronic is part of the language! You wonder where he found time to write all that poetry!

2. The Prince Regent (later George IV). I’ve never much liked Prinny. He had so much going for him and he squandered it all in self-indulgence. But he gave his name to the wonderful Regency period and he ruled over an England packed with interesting people and events. George was definitely a rogue – he racked up enormous debts, locked his wife out of his coronation, entertained extravagantly (in 1811, he held a dinner for 3,000 people which included live gold fish swimming down a stream in the middle of the table), and he contracted an unofficial marriage with his Catholic mistress.

3. Napoleon Bonaparte, Emperor of France. Napoleon is one of those titanic historical characters it’s actually hard for us to get our head around. He was definitely a rogue, not just because he plunged Europe into years of war. He had plenty of energy left for the bedchamber too. He married Josephine, a woman six years older than him, and then divorced her when she couldn’t give him a child. He had mistresses all over Europe, including actresses, opera singers and aristocrats. Sadly, two of the famous stories about him, the one where he said, “Not tonight, Josephine,” and the one where he wrote to Josephine from the battlefield, telling her not to wash until he got home, are both later inventions. The legend is always more interesting!

4. Arthur Wellesley, the Duke of Wellington. Actually Wellington, who brought the rampages of Rogue 3 to an end at the Battle of Waterloo, was a straight shooter who called a spade a spade and loathed humbug. But he had his share of mistresses, partly, I think, as a result of a very unhappy marriage. When in 1825, famous courtesan Harriette Wilson threatened to reveal secrets of their affair in her memoirs unless he paid her to keep quiet, he told her, “Publish and be damned.” And she did!

5. Giacomo Casanova.  Casanova (1725-1798) is actually a bit early to count as a Regency personality, but his antics wouldn’t be out of place in a historical romance. His fame rests on his memoirs, published after his death. From what I gather, there’s doubt as to their accuracy, but they certainly cover plenty of roguishness. He claims to have slept with 122 women, dabbled in the occult, escaped from prison several times, gambled like a fiend, and amassed huge debts. This is scandalous enough, but it’s even more so when you know that Casanova was ordained as a priest! Like Byron, his name has entered the language as a word for womanizer.

So that’s my Rogues’ Gallery. Are you a fan of rogues in historical romance? Why do you think the rogue is such a reader favorite? 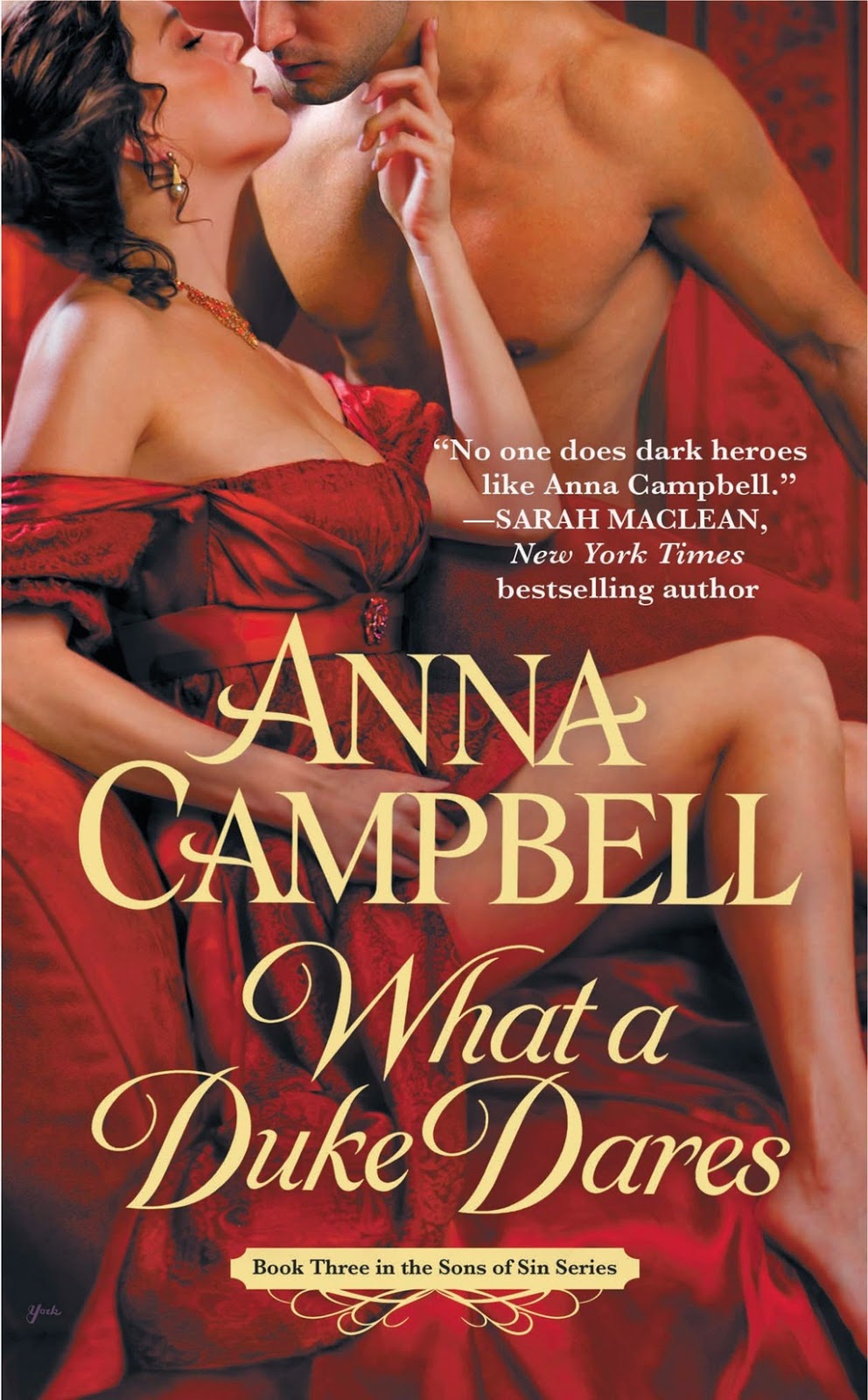 About WHAT A DUKE DARES
What woman in her right mind would say no to marrying the dashing Duke of Sedgemoor? Miss Penelope Thorne, that's who. She's known Camden Rothermere since they were children-and she also knows she'd bring nothing but scandal to his name.

Cam can hardly believe Penelope turned down his proposal. But if she wants to run off to the Continent and set the rumor mill ablaze, he can't stop her. Then her brother's dying request sends him to bring home the one woman he thought he'd finally gotten over.

The only way they'll both get back to London without their reputations in tatters is to pretend they're married during the journey. That means kissing like they mean it and even sharing a bed-until it becomes hard to tell where the game ends and true desire begins . . .

Always a voracious reader, ANNA CAMPBELL decided when she was a child that she wanted to be a writer. Once she discovered the wonderful world of romance novels, she knew exactly what she wanted to write. Anna has won numerous awards for her Avon historical romances including Romantic TimesReviewers Choice, the Booksellers Best, the Golden Quill, the Heart of Excellence, the Aspen Gold and the Australian Romance Readers Association's most popular historical romance (twice). Her books have twice been nominated for Romance Writers of America's prestigious RITA Award and twice for Australia's Romantic Book of the Year.

When she's not writing passionate, intense stories featuring gorgeous Regency heroes and the women who are their destiny, Anna loves to travel, especially in the United Kingdom, and listen to all kinds of music. She lives near the sea on the east coast of Australia, where she's losing her battle with an overgrown subtropical garden.