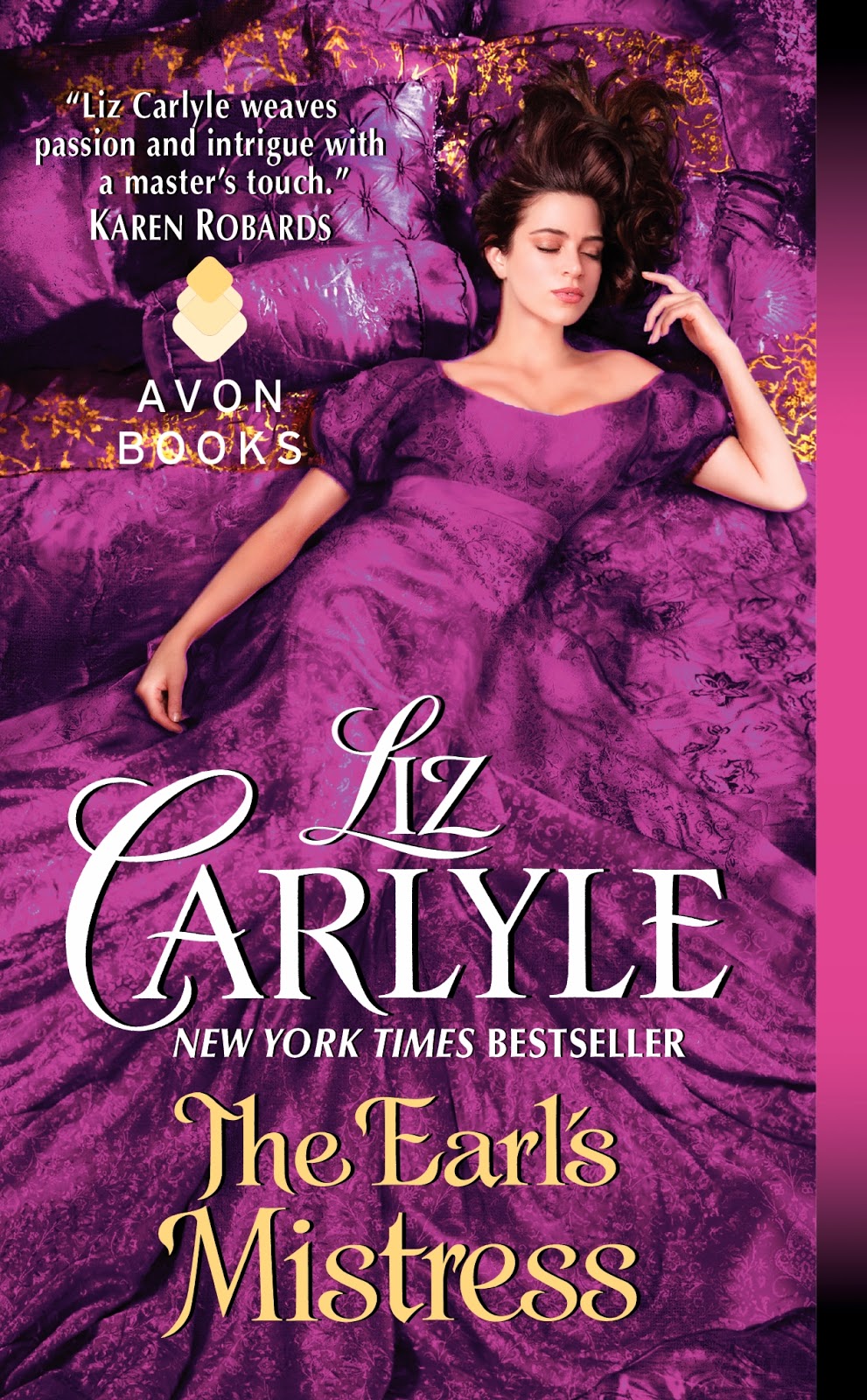 Blurb
Women rarely refuse the wicked Earl of Hepplewood, whose sensual skills are the stuff of legend. But when his new governess answers his proposition with a slap to his face, then stalks out with references in hand, Hepplewood finds more than his face is left burning . . .

Isabella Aldridge has brains, bravado, and beauty-but the latter is no use to a servant. With orphaned sisters to feed, eviction nearing, and Hepplewood’s words ringing in her ears, Isabella realizes she must barter her most marketable asset . . .

But when fate unknowingly sends Isabella back into Hepplewood’s arms, the earl must make an impossible choice-draw Isabella down into his sensual darkness, or behave with honor for the first time in his life.

I wasn't sure if I was going to add my thoughts to this post. However, I have decided to. Yes, I was a little worry when I looked at other people's thoughts. There are some reviews that might be consider harsh out there, and I do believe everyone is entitled to their own opinion of the story. Yeah, I would I went with the thought "What did I get myself into". As I started to read The Earl's Mistress, I was surprise by my reaction to the story. Yes, it isn't your typical Liz Carlyle story. It's a little different from the other stories I have read by her, but I still liked it.

Yes, majority of the story deals with Hepplewood trying to convince Isabella to become his mistress. At times he's over the top domineering, especially when he's around Isabella. However, it's his way of keeping control. You don't realize that until he tells the story of his past, which I have to say is a doozy. Anyway, at first you look at Isabella as pushover at times, and you wonder if she even has a back bone. As you read, you actually she that there is more her than the pushover you see. Of course, she submits to Hepplewood, but you see her trying to work her feelings out along the way. Some may view this as being indecisive. I look at her as someone who hasn't had a lot of sexual experience, which can be scary when you have a domineering person.

So, that's a huge chunk of the story, but there's more to The Earl's Mistress. For instance, Isabella is trying to protect her sisters from their crummy cousin Tafford. During the story he's always in the background. Isabella is worry what he might do to them cause she doesn't want to be married to debauched cousin. Once we get to the second half the story Tafford and whatever he's cooked up becomes the focus. Yes, Isabella and Hepplewood still have a relationship that hasn't been defined.

Here's what I think: Some people are not going to like Hepplewood and probably think Isabella is a fool for going to his bed and pretty much returning to it. However, Hepplewood's character actually made me laugh cause his domineering personality was over the top. At times I kind of heard his voice like Patrick Stewart as he narrated the Fifty Shades of Chicken Book Trailer.  However, once he starts removing the veneer, you can see that he's a decent guy with some dark tendency. Isabella may seem like a fool, but she does care for her family and would do anything for them. Overall, I liked The Earl's Mistress and if you can look pass the flaws it's actually a pretty good story. These are completely my thoughts and worth a shot.

“Mrs. Aldridge,” he said, snatching his shirt from the branch.  “Welcome to Greenwood Farm.  You’re a trifle early.  I shall take it as a sign of eagerness.”

Isabella stepped backward. “Eagerness?” she parrotted, her eyes fixated upon a broad expanse of bare chest.

Hepplewood moved with a languid grace, shaking out his shirt as he came.  “I was glad to learn you’d taken my good advice,” he said, shoving an arm in a sleeve, “but the coincidence of the thing did take me aback—as it has you, too, I see.”

But Isabella couldn’t begin to make sense of it; her brain felt stuffed with wool and her lungs had ceased to work.  Hepplewood dragged the shirt on, his chest wall rippling as he drew it down his lithe, smoothly muscled torso.

Somehow, she forced her gaze to his face, resisting the urge to run back to the carriage.  “I beg your pardon,” she said again, blinking slowly, “but whatare you talking about?”

He propped one hand on the gatepost that still stood upright, his gaze sweeping her length.  “My advice,” he said with a faint smile, “to give up the dull business of governessing for an option that better suits your . . . well, let us call them your God-given attributes.”

Indignation welled up inside Isabella.  “How dare you,” she said quietly.  “I do not know, Lord Hepplewood, just what sort of deceit you employed to trick me here, but I will have—”

“Mrs. Aldridge,” he interjected, his eyes flashing dangerously as he came around the gatepost.  “I should very much like the two of us to get on, butdeceit and trickery are not insults I’ll tolerate.”  He set a large, very firm hand on her forearm.  “Do we understand one another?”

But the word coincidence was slowly seeping into her consciousness.

“Surely you don’t mean to claim . . . ”  Isabella cut off her words, and tried to draw back.  “Surely you aren’t suggesting this is purely—”

“Accidental?”  He gave an odd half-smile.  “Little in life is.  I saw a woman I wished to bed, but alas, she declined.  Still, women, to my mind, are very nearly interchangeable.  It was no great inconvenience to ask the resourceful Mrs. Litner to find me another raven-haired, violet-eyed beauty willing to slake my lust.  Imagine my surprise when she wrote that I should expect you.”

“Dear God.”  Isabella tried to back away, but the hand on her arm did not relent.  “I don’t believe it.”

“Mrs. Aldridge,” he murmured, his eyes roaming over her face, “you approached Louisa Litner with every intention of marketing yourself in just the fashion I suggested.  And she has sent you to—well, let’s be blunt—to charm and to flirt with and to almost certainly warm the bed of one Mr. William Mowbrey, a gentleman of very specific tastes.  What can it possibly matter to you that I have turned out to be Mowbrey?”

“Does it?”  His voice dropped, his eyes suddenly heavy.  “My dear, you intrigue me.”

“I don’t wish to intrigue you,” she managed, setting a hand against his chest.  “I want n-nothing to do with you.”

But she knew it wasn't true; not entirely.  More than once during the long drive from London, she had remembered their almost-kiss, and wondered what this man next would be like.  Would his eyes flash with fire?  Would his touch singe her through her clothes?
Oh, yes.  It would.

And she, apparently, was an idiot.


Hepplewood had caught her chin, and was holding it none too gently.  “No, Mrs. Aldridge, I was not mistaken in you,” he murmured, his voice thickening. “You are a stunning creature—and very much in need, I think, of being tamed.”

Author Info
A lifelong anglophile, Liz Carlyle cut her teeth reading gothic novels under the bedcovers by flashlight. She is the author of sixteen historical romances, including several New York Times bestsellers. Liz travels incessantly, ever in search of the perfect setting for her next book. Along with her genuine romance-hero husband and four very fine felines, she makes her home in North Carolina. You can contact her via her website at www.lizcarlyle.com.