Yours In Scandal by Lauren Layne (Review) 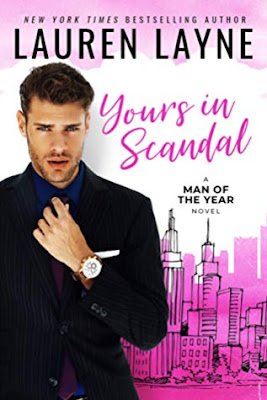 A few weeks ago I saw the cover for Yours in Scandal and I was like I want to read that. The main reason was the pink. I love the color pink, and the guy on the cover was pretty good looking. However, it was the pink cover that caught my eye. Plus, it looks like it's going to be a new series.

We get to meet Robert Davenport who happens to be the mayor of New York City. He's about to get out office, and looking to pursue his political career as the Governor of New York. He's just trying to find a way to take out the incumbent governor, so his team is looking for a way to get there. They might have found a way with the Governor's daughter, Adeline Blake formerly known as Addie Brennan. Robert never to intrigued by Adeline, and struggles with the idea of using Adeline to take down her father.

Overall, Yours in Scandal was an adorable read. Don't get me wrong they have some fun in the story, but they are pretty cute together. They do well with keeping each on their toes. I was pretty entertain with their banter. You want something light with a little touch of politics, you might enjoy Yours in Scandal.

Copy provided by Montlake via Netgalley