Forever Romance Review + Excerpt + Giveaway: Most of All You by Mia Sheridan 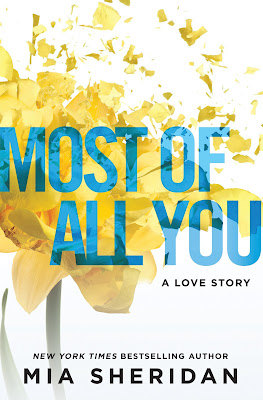 Crystal learned long ago that love brings only pain. Feeling nothing at all is far better than being hurt again. She guards her wounded heart behind a hard exterior and carries within her a deep mistrust of men, who, in her experience, have only ever used and taken.

Then Gabriel Dalton walks into her life. Despite the terrible darkness of his past, there's an undeniable goodness in him. And even though she knows the cost, Crystal finds herself drawn to Gabriel. His quiet strength is wearing down her defenses and his gentle patience is causing her to question everything she thought she knew.

Only love can mend a shattered heart . . .

Crystal and Gabriel never imagined that the world, which had stolen everything from them, would bring them a deep love like this. Except fate will only take them so far, and now the choice is theirs: Harden their hearts once again or find the courage to shed their painful pasts.

The best way to describe this read is gut-wrenching, but absolutely amazing. Seriously, I love this story even as much as it tore me apart. I mean we have Crystal/Ellie who has falling some hard times. I mean life has giving her a crappy hand and she's barely hanging on. Then we have Gabe who is barely holding on, but he's slowly managing it. So, comes together to broken people who basically heal one another. Gabe couldn't stand being touched, but I probably would feel the same thing if I was abducted at a  young age and barely my escape. He's fairly well adjusted for all the crap he went through. Then we have Crystal who is living day by day. Yes, she's a stripper, and she has a tough outer shell. Deep down she's softy.

Anyway, we take a journey with these two as they heal one another. Let me tell you this roller coaster of a read wasn't easy. Seriously, Mia had me turning inside out with these characters. Crystal isn't an easy person, but Gabe tries to be understanding, especially when she's being a witch to him. I loved this story. I thought it was a beautifully written, but rough. Oh so rough. There were times Ellie and Gabe wouldn't get together. I did love how Crystal started to trust Gabe enough to give her real name. Now I kind of hope to get a story for his brother, because there are somethings that happen in the story I would like to know about.

Copy provided by Forever via NetGalley. 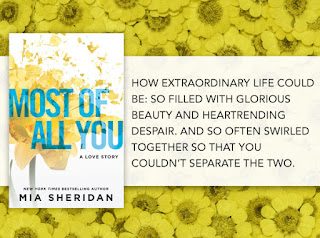 
I swallowed heavily, my mouth going dry as I took in the masculine beauty of his practically naked body. He was…divine. That was the word that immediately came to mind. Divine. Angelic. Godly.
My gaze soaked in his strong, broad shoulders, the tight, lean muscles of his chest, the taut ripples of his stomach. As if my eyes were drawn to him like a magnet, they moved down his chest to his muscled thighs, his well-formed calves and then back up to his boxers, where the outline of his male anatomy was just barely visible against the thin material.
My core clenched, wetness pooling between my thighs. I blinked, completely unaccustomed to this kind of reaction when it came to a man’s body. I wanted to simultaneously run away and step toward him, to reach out and trail a finger down his chest the way I’d just run a finger over the tiny stone bird.
“My father made that.”
“W-what?” God, my voice sounded too breathy, too stunned.
“The sparrow.”
He crossed his arms over his chest, obviously self-conscious about his state of undress. He gave a quick nod downward. “Sorry, I didn’t know you’d be up.”
Again, my eyes moved to his bare chest. There was a sparse trail of hair under his belly button leading into the waistband of his boxers. My eyes leapt back up to his, and I practically gulped, sure he had heard it when his eyebrows twitched slightly.
I turned my head, my heart beating so loudly in my own ears I was sure he could hear that, too, even from where he stood. “It’s only fair, I suppose,” I murmured.
“What’s that?”
“Now we’ve both seen each other half-naked.”
Gabriel tilted his head, assessing me in some mysterious way. He suddenly turned and walked back toward his room. I stood rooted to the spot, confused, when he returned just as quickly as he’d left, pulling a T-shirt over his head. He walked toward me, coming to stand directly in front of where I stood. His expression was slightly shy, slightly teasing. “I hope…that if we see each other naked again, it won’t be a job, or an accident. It will be because we both want it, and because it means something.”
What?
Visions swirled through my mind, unbidden: tangled limbs and twisted sheets. Heat filled my veins, blood pumping between my legs. It was too much. It was…out of my control and it scared me. I didn’t want to think of Gabriel that way, couldn’t think of Gabriel that way. In truth, had never thought of any man that way. “Mean something?” My voice was a mere whisper.
He nodded, his expression going serious, his eyes filled with sudden gravity. His hand slowly moved up to my hair, and he brushed a piece back from my face. His hand lingered, his knuckle brushing gently down my cheekbone. My breath hitched at the subtle touch. His full lips parted slightly, those angel eyes moving over my features as if he was memorizing me, memorizing the moment. I was spellbound, caught once again in his gaze. No one had ever looked at me the way Gabriel was right then, not in all my life.
“Yes.” It was all he said, leaving me to try to comprehend his meaning. But of course getting naked always meant something. A bribe, a paycheck, a coercion, a means to an end…only I knew very well Gabriel didn’t mean any of those things, and it was impossible to convince myself he could. I already knew better. And I didn’t want to think about what getting naked would mean to Gabriel because the very idea filled me with terror and an aching, needy want. But mostly terror.

Mia Sheridan is a New York Times, USA Today, and Wall Street Journal Bestselling author. Her passion is weaving true love stories about people destined to be together. Mia lives in Cincinnati, Ohio with her husband. They have four children here on earth and one in heaven.