Caught by the Scot by Karen Hawkins (Review) 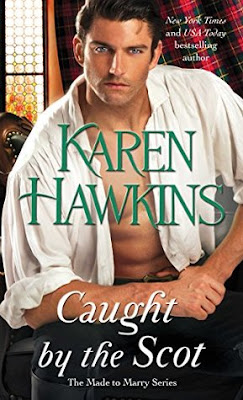 I finally finished Caught by the Scot and I have to say that it was pretty fun to read through most of the story. There were parts where it became a little longwinded. Towards the end I wanted Conner and Thea together at a certain point the story carried on with more antics.

Anyway, we have Conner who has found that he and his brother stand to inherit their family lands and stuff, but there is a stipulation they must married and good standing women. Otherwise the stuff will go to a rival clan. Eek! Conner believes he has the perfect girl, Theodora Cumberbatch-Snowe . I mean what could go wrong. Basically, he lallygags, and finds out she's decided to elope with a local Squire. Crap. I know. Now he's off to stop that wedding. Thea has decided she's tired of waiting for Conner to actually she her, so she decided to take the next best thing. Honestly, this quite a entertaining. We have Conner trying to convince Thea she's doing the wrong thing, and at the same time offer himself as the better offer. Oh goody.

There are array of characters that beginning to popup as Conner tries to stop this wedding. Picture this as a romantic comedy of errors. I enjoyed the story for the most part. However, I felt that story started to drag a little towards the end, but mostly a good read. I actually like how Conner's ego took a nosedive. It needed to be brought down a peg or two. I liked how decided she wasn't going to wait around for Conner to wake up to see her for real. Overall, Caught by the Scot is a light fun read as they gallivant towards Gretna Green. So, if you are in the mood for a light fun read, Caught by the Scot might be your kind of read.