Temptations of a Wallflower
The Wicked Quills of London #3
By: Eva Leigh
Releasing April 26, 2015
Avon 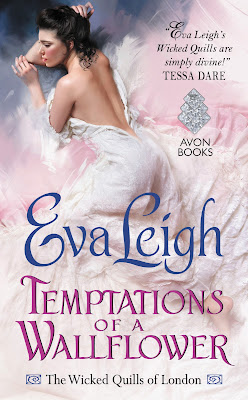 Tasked with unmasking London’s most scandalous author by his powerful family, Jeremy has no idea that his beautiful, innocent bride is the very woman he seeks to destroy. His mission must remain a secret, even from the new wife who stirs his deepest longings. Yet when the truth comes to light, Sarah and Jeremy’s newfound love will be tested. Will Sarah’s secret identity tear them apart or will the temptations of his wallflower wife prove too wicked to resist?

We meet Jeremy who happens to be a vicar, but he seems to have a void in his life. At this time, he's not sure what to do with his life, when his father summons him with the task to find this horrible woman who writes trash. Being the loyal son, he does his father's bidding, and at the same time he starts to realize that his father might be wrong about the lady in question.

I liked The Wicked Wallflower, the story is pretty good. There were few pacing issues, but overall a good story. I like the fact that Sarah's secret profession draws these two unlikely characters together. It was nice to see the change in these two characters. Sarah learned that she wasn't a completely person without her writing, and trying to explain that to Jeremy wasn't the easiest thing to do. Writing scandalous stories that would shake society to the core can be kind of scary. I actually liked Jeremy's character towards the end, because he had to learn what truly makes him happy. It was nice to see him stand up to his father eventually, but it took a strong woman to show him that he's can do anything he wanted. The last 10 chapters are my favorite, because we have Jeremy and his conundrum when he finds everything out. He has to decided what's more important being happy or pleasing his father.

Overall, The Wicked Wallflower is a good read. If you are looking for a story with your not so typical heroine and willing to break the mold of all other heroines, Sarah would be your gal. The premise of the story is creative with a duke's daughter and a vicar. Eva makes the story work. The great things about this story it can be read as a standalone. 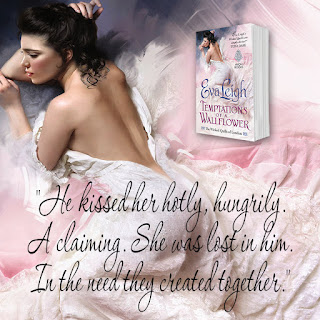 EVA LEIGH is the pen name of a RITA® Award-nominated romance author who writes novels chock-full of smart women and sexy men. She enjoys baking, Tweeting about boots, and listening to music from the ‘80s. Eva and her husband live in Central California.

http://www.tastybooktours.com/2016/04/temptations-of-wallflower-wicked-quills.html
Posted by Melody May at 8:15 AM