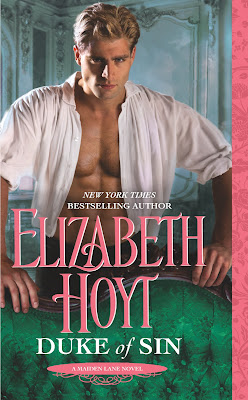 A MAN OF SIN

Devastatingly handsome. Vain. Unscrupulous. Valentine Napier, the Duke of Montgomery, is the man London whispers about in boudoirs and back alleys. A notorious rake and blackmailer, Montgomery has returned from exile, intent on seeking revenge on those who have wronged him. But what he finds in his own bedroom may lay waste to all his plans.

A WOMAN OF HONOR

Born a bastard, housekeeper Bridget Crumb is clever, bold, and fiercely loyal. When her aristocratic mother becomes the target of extortion, Bridget joins the Duke of Montgomery's household to search for the incriminating evidence-and uncovers something far more dangerous.

A SECRET THAT THREATENS TO DESTROY THEM BOTH

Astonished by the deceptively prim-and surprisingly witty-domestic spy in his chambers, Montgomery is intrigued. And try as she might, Bridget can't resist the slyly charming duke. Now as the two begin their treacherous game of cat and mouse, they soon realize that they both have secrets-and neither may be as nefarious-or as innocent-as they appear . . .

My Thoughts:
I did like Duke of Sin, but it took me a little time to get into the story. Don't worry if you haven't read any of the previous Maiden Lane books you won't be lost. The previous books focus their attentions in St. Giles and the Ghost of St. Giles, but in this one we do not journey to there. Instead we stay with Val and Bridget.

Val cracks me with his all his dukeness. He is definitely unscrupulous, and he waves his authority around like nobody else business. When Bridget calls him out he basically tells her, "I'm the Duke and I can do whatever I want." He takes no responsibility for his actions and uses his title as a shield. At the same time as he gets to know Bridget, he starts to question his actions. Not completely enough to say I renounced my evil ways and decided to be good, he can't be a boring lord. At first I wasn't sure I was going to like the cocky bastard, but it kind of grows on you. Like Bridget I didn't fully agree on his methods, they are a bit unconventional, which is be extremely kind.

Bridget, I simply adore. Oh my she puts Val in his place. She sees right and wrong, and she comes to understand Val. No one has ever tried or they were to scared to do so. As she gets to know him, she does see some good in him. There is a good, buried deep inside of him. As the story unfolds we get to see his childhood which is heartbreaking.

As these two come together, it's great. I mean these two definitely are fun together, you have one who is prim and proper, and the other who is unscrupulous and cares for nothing. Val is sinfully delightful in his wicked ways. Overall, Elizabeth did a wonderful job Duke of Sin. She got me to like Val even when I wasn't sure. Bridget was easy to love. I even felt bad for her at times, because she should have had more than what she was given. I liked how Val stood up for her.

Val smiled evilly at the child and reached into his pocket.
“Do you,” he asked, “like kittens?”
And he held out a black, fluffy kitten with a white chest.
Annalise blinked at the kitten’s green eyes.
The kitten blinked back.
“Oh yes!” said Annalise.
Val deposited the kitten into the plump little arms and strolled to the kitchens, where Hecate and her kittens were in residence, swinging his gold walking stick.
There were seven more kittens, remaining and a garden full of his enemies children…

Love this, because he's still the same old Val, but uses a different weapon. Diabolical.  Anyway, a pretty good story, and I can't wait for the next one.

“I was told you had need of me, Your Grace,” she reminded him, folding her hands at her waist to hide the trembling that had begun again. She’d been in demand before this position. Duchesses and lionesses of society had wanted her.
“So practical,” he mused, tilting his golden head back to gaze, presumably, at the gaudy sky-blue velvet canopy of his bed. She’d always thought it rather vulgar, actually. “I suppose that would be considered a good thing in a housekeeper.”
“It’s generally considered so, Your Grace.”
“And yet, I find it somewhat…”—he raised his naked arm straight up above his head and twirled his hand as he thought—“irksome.”
“I am sorry, Your Grace,” Bridget said as pleasantly as she could, which, sadly, was not very.
“Oh, don’t be,” the duke murmured silkily. “One can’t help one’s nature, no matter how irritating it is to others.”
His azure eyes suddenly dropped to pin her, hard and merciless, and she lost her breath as she fell into his predator’s stare. It was like looking into the eyes of something inhuman, almost otherworldly. Her chest ached as she stared at him, the air still locked within her, but at the same time the place between her legs ached as well.
Then she inhaled, filling her lungs with sweet air, as he watched her still, his eyes half-lidded, and she felt an odd exhilaration, as if a gauntlet had been thrown down. As if they were adversaries, equal on the field.
Which was completely ridiculous.
Possibly she shouldn’t have indulged in that third cup of tea this morning.
“I wonder whom you work for, Mrs. Crumb?” he whispered.
“Why, for you, Your Grace,” she replied, holding his gaze.
He snorted.
She felt a bead of perspiration trail down her spine.
He strode, nude, to his desk, and, bending over it, afforded her a quite scandalous view of his muscular bottom. He seemed to have a dark mark of some kind on the left cheek. Good God, it looked like a tattoo. What—? “Why, Mrs. Crumb,” he drawled, and she snapped her gaze belatedly up to find that he’d turned back to her—damn it! “Were you ogling my arse?”
She opened her mouth and then wasn’t sure, exactly, what to say. Was he about to dismiss her or not? “I…I—”
“Ye-es?” He took one long stride toward her.
She was suddenly, overwhelmingly aware of what she’d until now successfully ignored: He. Was. Nude.
His shoulders were wide, his chest highlighted by pale-pink nipples drawn tight, with but a few curling golden hairs between. His torso narrowed in a perfect V to a slim waist and a shallow belly button. A thin line of slightly darker hair led to his genitals.
During his supposed absence Bridget had had plenty of time to study the life-size nude portrait of the duke hanging next to his bed. She’d long thought the dimensions of his manhood exaggerated.
They were not.
She hastily glanced up to find him standing far too close to her, a wicked smile playing about his mouth.


“Oh, Mrs. Crumb, such a look,” he murmured, his voice a deep purr, his bare chest brushing against her snowy white apron. “Why, I don’t know whether to guard my bollocks…”—his gaze dropped to her mouth—“or to kiss you.”

Elizabeth Hoyt is the New York Times bestselling author of over seventeen lush historical romances including the Maiden Lane series. Publishers Weekly has called her writing "mesmerizing." She also pens deliciously fun contemporary romances under the name Julia Harper. Elizabeth lives in Minneapolis, Minnesota, with three untrained dogs, a garden in constant need of weeding, and the long-suffering Mr. Hoyt.