Lusting for Covers (96): The Untamed Earl by Valerie Bowman 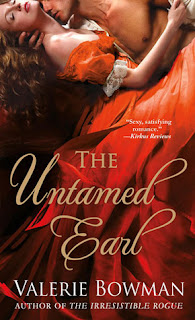 AN INDECENT PROPOSAL
Lady Alexandra Hobbs, the daughter of the Duke of Huntley, has intended to marry Lord Owen Monroe since she first glimpsed him from the window of her bedchamber, back when she was just a girl. But the duke has already chosen Alex's infamously spoiled elder sister, Lavinia, for Owen. And now there's no turning back.
Owen has spent most of his bachelor years drinking, gambling, and skirt-chasing. He won't see another pound from his parents, however, until he's engaged to Lavinia. Desperate, he accepts an offer from her innocent and spirited--and absolutely beautiful--sister Alex: She will turn him into a perfectly tamed suitor, and show him how to woo the shrew. But when Alex's true motives come to light, will their bargain lead to recriminations--or to a romance that defies everyone's expectations?

It's a pretty dress. This story seems like it's going to be an emotional wrecker. Overall, LOVE THE COVER. What do you guys think of my pick?