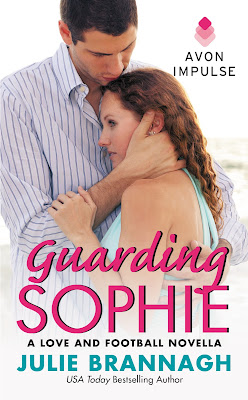 Seattle Sharks wide receiver Kyle Carlson needs to escape and Noel, Washington, is the perfect place for him to do it and figure out his next step. He likes the seclusion and predictability of the small town…until the biggest surprise of his life turns up in the local grocery store.

Sophie Hayes has her own reasons for disappearing without a trace and moving to Noel. This mountain town makes her feel safe for the first time in a long time. But her quiet routine is threatened when Kyle walks back into her life. Growing up in the same Florida town, she always had a little thing for the sexy football player. This tie to her old life, though, could mean she has to run again, even if her heart wants to stay.

When the reason she fled shows up in Noel, Kyle and Sophie, with a little extra help from his teammates, must decide to stay and fight for the life, and love, they’ve found together.

My Thoughts:
All right, Guarding Sophie is a sweet story. We have two people that are hiding out. Kyle who is hiding out from his money grubbing family. He's just tired of them begging money, because he's a famous football player. Yep, that can get old after awhile. So, in a way he went underground. Not really, but you get the gist. We also have Sophie who had to runaway of her old life cause of psycho ex-boyfriend. Aren't they the fun ones, not.

Kyle and Sophie knew each other back in high school, and they get a chance to reconnect during Guarding Sophie. Anyway, this story was a quick little read that could have been a lot longer, but it's a novella. It's fine as a novella, because both of these characters were able to find resolutions for their problems while finding love. YAY! It shows that the Sharks will stick together no matter what on or off the field. So, if you are looking for a quick read with a football player who gets a second chance to go out with a high school crush while being a hero, you have met your match in Guarding Sophie. Novella, don't want to give too much away. Happy reading.

Kyle Carlson wore sunglasses, but they were no match for the brilliance of Noel, Washington’s late-spring sunshine. Noel was a mountain pass and a ninety-minute drive away from his life in Seattle. The small town was the perfect place to get lost for a while.
He shielded his eyes with one hand as the real estate agent and interior decorator he’d hired drifted into view. The real estate agent held out a shiny new set of house keys to him.
“It’s all yours, Kyle. Congratulations.”
“Thanks,” he said. “Everything’s ready to go?”
“Of course,” the decorator said. “You wanted simple but comfortable and earth tones. I hope you’ll love it. If you have questions or need anything else, please give me a call right away.” She dug into what Kyle knew was an expensive designer handbag and extended her brightly-patterned business card to him. “Thank you for the business and enjoy.”
“Take a look inside,” the real estate agent said. “I think you’ll love it.”
“I’ll do that,” Kyle said. “Thanks again.”
The real estate agent and interior designer shook hands with him and got into their car. He raised a hand in farewell as they followed the winding, narrow road back to downtown Noel, I-90 and civilization as quickly as possible.
Kyle longed for privacy like other people wanted drugs or alcohol. He hadn’t always been so anti-social. The past seven years of dealing with scores of family members, “friends” and others who thought he was their personal ATM machine since he was drafted into the NFL had finally taken its toll. He realized that his profession didn’t really lend itself to anonymity. Maybe he should have become a plumber or an auto mechanic instead of the starting wide receiver for the world champion Seattle Sharks. If he’d had a more unobtrusive life, he’d go to work from seven to four or so, go home, put his feet up, have a beer and quit worrying about the problems that came when one was lucky enough to earn a staggering income for catching a football six months a year.
Kyle walked up the front path and climbed two stairs to the A-line’s wraparound front porch. The front door of his new cabin was hardwood inlaid with baguettes of beveled, leaded glass. Two stories featured floor-to-ceiling windows that looked out over a view of blue skies, puffy white clouds, and endless evergreens. Instead of the rustic, unfinished structure most people would imagine when hearing the word “cabin”, his new place was as luxurious as the stylish Seattle hotel he’d just checked out of. It was also the perfect place to hide out for a couple of months.
He stepped over the threshold of the cabin he’d spent a shocking amount of money on and took a deep breath. Sun-warmed, lemon-scented air surrounded him. The front door shut behind him as he glanced around.
The floors were hardwood. The furnishings were earth tones, man-sized, with a few brightly colored accents to draw the eye.  A gas fireplace with a stone surround dominated most of one wall in the living room. A long staircase led to a loft that overlooked the first story and three bedrooms. He’d thought long and hard about the extra two bedrooms before buying the place. If he had nowhere for anyone else to sleep, they’d be a lot less likely to visit, which worked for him.
He let out a contented sigh as he realized the only sound was his breathing. He’d bought the house in the name of a trust his family and friends knew nothing about. He’d moved out of his huge house in Newcastle two days ago and used the proceeds from its sale to fund the house he was currently standing in and a one-bedroom condo in a Bellevue high rise, also in the name of the trust.  It was his choice who found out where he was and what he was doing from now on.
He’d have almost two months of solitude before training camp started. He couldn’t wait.

USA Today Bestselling Author, Julie Brannagh has been writing since she was old enough to hold a pencil. She lives in a small town near Seattle, where she once served as a city council member and owned a yarn shop. She shares her home with a wonderful husband, two uncivilized Maine Coons and a rambunctious chocolate Lab.
When she’s not writing, she’s reading, or armchair-quarterbacking her favorite NFL team from the comfort of the family room couch. Julie is a Golden Heart finalist and the author of contemporary sports romances.