A Billionaire Between the Sheets
The Unexpected Billionaires, 1
Katie Lane
Forever Romance
November 24, 2015 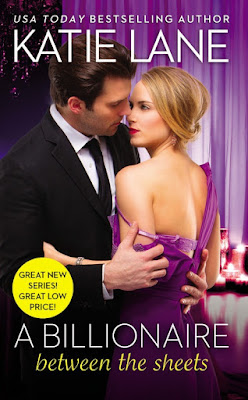 A commanding presence in the boardroom and the bedroom, Deacon Beaumont has come to save the failing company French Kiss. He was born to be boss in this glamorous new world of lacy lingerie and stunning supermodels. But one bold and beautiful woman dares to question his authority.Olivia Harrington has dedicated her life to the company's success. Just because Deacon is sexy as hell doesn't mean he'll make a better CEO. With a limitless supply of push-up bras and garter belts, Olivia turns her considerable feminine charms on Deacon to discover what makes him tick . . . and reveals instead the billion reasons why she wants him to stay.

My Thoughts:
Katie has come out with a new series where we are introduced to three brothers Deacon, Nash, and Grayson Beaumont, and they have inherited their uncle's lingerie company. Which was a total surprise to them, after all their uncle wasn't to keen on them. The Beaumont brother's weren't the only ones surprise by this revelation, but Michael Beaumont's step-daughter, Olivia Harrington. Since she had devoted so much time and effort, and to have her dream of owning the company ripped away by three backwoods brothers. Yes, I know bit harsh, but when you meet them the first time around it's in the backwoods of Louisiana. Anyway, Olivia is trying to purchase the company from the brothers, but Deacon keeps putting a stop on it. At first it's for revenge, but then something changes along the way. Plus, Deacon starts falling for Olivia.

A Billionaire Between the Sheets is a pretty good start to Katie's new series. We have three brothers who didn't expect to inherit a company, let alone becoming instantly rich. We watch a relationship develop between the Beaumont brothers and Olivia, and a more romantic relationship between Deacon and Olivia. We also watch Deacon learn to let go of the past. He has a lot resent between his uncle that doesn't get resolved until we get closer to the end. I liked Olivia character, because she was a nice balance. She wasn't a bitch, which she could have been since the Beaumont brother's inherit her "company". Along the way she learn who she was and what she wanted to be, and Deacon also helped. We also have some fun secondary characters, for instance Deacon's brother's, Nash and Grayson, Babette the temperamental french designer, Johnathan Livingston the seagull (yes, she named the seagull), and the Huckabees (the nudist). I'm excited to see what Katie cooks up for Nash and Grayson, because it was enjoyable time to watch and Deacon and Olivia fall for one another. Overall, an enjoyable journey as I read A Billionaire Between the Sheets.

Excerpt from A Billionaire Between the Sheets:


Uncomfortable beneath his intense gaze, Olivia turned to the window.  The plane taxied down the runway, gaining speed until the scenery became a blur, then it lifted and fought against gravity and wind currents until it reached the right elevation and was able to level out.  Olivia felt the same way.  She felt like she had spent her entire life fighting against unknown forces just to find that space where she could finally enjoy the ride.  She was brought out of her thoughts by the caress of Deacon’s thumb on her knuckles.  She turned from the deep blue of the skies to the deep purplish blue of Deacon’s eyes.  And suddenly everything inside her leveled out.
“So tell me, Ms. Harrington,” he said with a slight tipping of his lips.  “What else do you want besides a trip to Paris?”
It was a good question.  At one time, she could’ve easily answered it:  Her father’s return.  Michael’s love.  French Kiss’s success.  But now, her mind seemed empty of want . . . save for one thing.
Unable to help herself, she leaned across and kissed him.  His lips were as hot as the rest of him, and she moistened them with her tongue before hungrily taking advantage of their softness.  He went to release the clasp on his seatbelt so he could no doubt take control of the situation, but Olivia pulled back and shook her head.
He sent her a quizzical look, but allowed her to take his hand from the clasp and rest it on the arm of the seat.  After unbuckling her belt, she did the same with his other hand, curling his fingers around the soft leather of the arm.
The flight attendant appeared, carrying a bottle of champagne.  “Would you like me to serve lunch now, Mr. Beaumont, or wait until later?”
“Later would be better,” Olivia said with a smile.  “Mr. Beaumont and I have some business to discuss.”
“Of course.”  The attendant placed the bottle of champagne in the holder on the mini bar.  “Just buzz if you need me.”  She pulled the pocket door closed behind her.
Olivia turned to find Deacon watching her.  “Please don’t tell me we’re going to spend the entire trip talking about business,” he said.
“What else would we do?”  Slipping off her high heels, she got out of her seat and knelt in front of him.  “Now the key to any good business meeting is knowing when to take charge and when to keep your mouth shut.”  She smiled at him as she spread his legs and moved between them.  “This time I’m in charge, Mr. Beaumont.  Got it?”

About Katie Lane
Katie Lane is the USA Today bestselling author of the Deep in the Heart of Texas and Hunk for the Holiday series.  Katie lives in Albuquerque, New Mexico, and when she isn't writing, enjoys reading, going to the gym, golfing, traveling, or just snuggling next to her high school sweetheart and cairn terrier Roo.

a Rafflecopter giveaway
Posted by Melody May at 8:19 AM