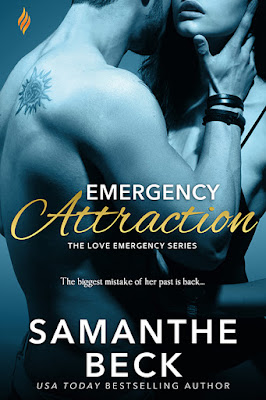 About the Emergency Attraction

Ten years ago when Shane Maguire chose the Marines as his escape from some trouble of his own making, he only regretted one thing—leaving Sinclair Smith behind. Despite his best intentions, she ended up as the one that got away. Now he’s back, determined to reclaim everything he gave up, including Sinclair.

Sinclair is immune to Shane’s charms. She’s immune to stolen kisses behind the gym. And she’s definitely immune to that maneuver he did in the back seat of his car… Okay, maybe her hormones are susceptible, but she has absolutely no desire to risk anything on the bad boy who broke all his promises.

When a little emergency lands her at his mercy, he offers her a deal she can’t refuse. And this time, she’ll show Shane what it means to be left wanting…

Let me tell you how much fun Emergency Attraction was, but then again Samanthe Beck definitely knows how to make fun and sexy work. Talk about the heat that was coming off these two. We have Shane who is trying to get Sinclair out of his system so he can move on with his life. Then we meet Sinclair who wants nothing to do with Shane. He could drop dead for all that she cared. Shane has his work cut out for him. Fortunately, he remembers all the things that makes Sinclair weak in the knees.

Emergency Attraction had some amazing sexual tension that was humming through the book. Seriously, I thought the lead up to them jumping into bed was sizzling. Talk about getting a fan or a cold shower. Oh so yummy. However, there is more to the story that these two reconnecting, the town is trying to a get a project getting and Shane is there to help what is best recourse would be. However, if you are looking for a sizzling read that gets you nice and toasty, Emergency Attraction won't let you down. I had a lot of fun between these two. I mean Shane is trying super hard to get Sinclair out of his system, but is he going to want to let go once he gets what he wants.

“Not a mark on the car.”
Shane turned and walked back to where Sinclair stood with her skirt caught in the car door. “Or you?”
Her chin came up as he drew near. “That goes without saying.”
“Does it?” He dropped his gaze, and took a slow tour of some territory he’d once been intimately familiar with, starting at her bare shoulders and continuing to where satiny skin disappeared beneath blue silk.
“I remember finding some extremely creative places to leave marks.” He ran his finger along the neckline of her dress. “So you wouldn’t get in trouble. You didn’t need to be as cautious with me.” “I”—she broke off and swallowed—“I don’t remember…”
Oh, yeah. She remembered. He took the gift bag out of her hand and set it on the roof of the Mercedes. “I’ll let you in on a little secret, Sinclair.”
“What?” The word barely qualified as a whisper.
“I’m still extremely creative.” With that, he dropped to his knee, and peered behind her. Her hand smacked his shoulder. “What are you doing?”
“Seeing if I can find a creative solution to your little predicament.” The position gave him an up-close look at the tangle of her skirt in the car door, the torn seam that rendered the dress un-wearable—he turned his head slightly—aaand the tiny, lacy, black panties that left mouthwatering portions of her ass bare to his view. Without doing any sort of motive check, he let his cheek brush the smooth flesh.
Muscles quivered in response. The hand on his shoulder switched to the top of his head, but she didn’t push him away. He trailed his lips across her thigh, automatically following the line of her panties where it hugged her hip and arrowed around front.
Her shuddery exhale triggered his inhale. Her scent stormed his senses, achingly familiar, and dangerously arousing. The molecules infiltrated his brain, coated the back of his throat, and left him dizzy from need. Balancing before her on both knees, taking a hip in each hand, he slowly closed in on the sheer triangle covering the prize.
“Shane…”
He took another hungry inhale. The tip of his nose skimmed the lace. “Yes?”
Those slim fingers slid down until her palm cupped the back of his head. Her thighs parted.
“Ye—”
A car alarm shattered the silence and broke the spell lust and memories had woven around them. She jerked away, shoved her skirt down, and glared at him. “That’s not part of our deal.”
He stood, intentionally taking up the space she’d tried to carve out for herself. “Don’t kid yourself, Sinclair. That’s always been part of our deal.”

USA Today bestselling author Samanthe Beck lives in Malibu, California, with her long-suffering husband, their turbo-son, and a furry ninja named Kitty. When not dreaming up fun, fan-your-cheeks sexy ways to get her characters to happily-ever-after, she searches for the perfect cabernet to pair with Ambien.