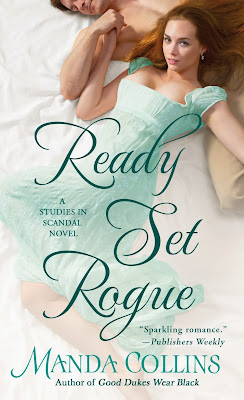 From the bestselling author of The Lords of Anarchy series, comes the exciting first installment of Manda Collins’ new Studies in Scandal series: READY SET ROGUE. Collins is back in the Regency era with a passionate, yet unexpected romance that comes in the wake of a thrilling murder mystery.

When scholarly Miss Ivy Wareham receives word that she’s one of four young ladies who have inherited Lady Celeste Beauchamp’s estate with a magnificent private library, she packs her trunks straightaway. Unfortunately, Lady Celeste’s nephew, the rakish Quill Beauchamp, Marquess of Kerr, is determined to interrupt her studies one way or another...

Bequeathing Beauchamp House to four bluestockings—no matter how lovely they are to look at—is a travesty, and Quill simply won’t have it. But Lady Celeste’s death is not quite as straightforward as it first seemed…and if Quill hopes to solve the mystery behind her demise, he’ll need Ivy’s help. Along the way, he is surprised to learn that bookish Ivy stirs a passion and longing that he has never known. This rogue believes he’s finally met his match—but can Quill convince clever, skeptical Ivy that his love is no fiction?

My Thoughts:
Ready Set Rogue introduces us to four charming young ladies who tend to love their particular study. Each one has a different field of study they are quite good at. We meet Ivy, she loves the languages, Daphne, she has a love for math, the twins Gemma & Sophia: Gemma loves her fossils while Sophia is the artist. All of these are scandalous to young ladies, but Lady Celeste wanted to them a chance to pursue their talents. However, Celeste ends up mysteriously dead and it's up to Ivy to figure out who did along with the help of Quill.

Each of the young women are very unique and I'm sure we will get to know each one better, but the focus is on Ivy and Quill. Ivy is fiery and quick and she gives Quill a run for his money. They start off a little rocky when they first meet. It's a little rough, but they find themselves falling lustfully fast. Good thing they work well together. I do like Quill even though he can be a little pigheaded at times, and he's a total guy at moments.

Overall, Ready Set Rogue is a great set up for an adventure and mystery to solve. Manda usually has smart heroines that give her heroes a run for the money. I can't wait to see how the other young ladies will find their young man. Studies in Scandal is sure set the gossip rags some talk and I can't wait to see more of this series.

Copyright © 2017 by the author and reprinted by permission of St. Martin’s Press.

Manda Collins is the author of The Lords of Anarchy series, which includes Good Earl Gone Bad and A Good Rake is Hard to Find, as well as several other Regency-set romances. She spent her teen years wishing she’d been born a couple of centuries earlier, preferably in the English countryside. Time travel being what it is, she resigned herself to life with electricity and indoor plumbing, and read lots of books. When she’s not writing, she’s helping other people use books, as an academic librarian.