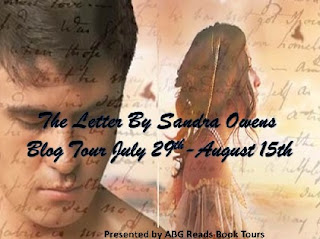 Today I have with me Sandra Owens the author of The Letter. I hope y'all give her a warm welcome to What I'm Reading.


Hello, Sandra, how are you today?

I’m wonderful…maybe a little tired, though.  I’ve just returned from the Romance Writers of American National Conference in Atlanta. I had an awesome time, but now I’m resting my poor feet and trying to catch up on sleep.

Can you tell us a little bit about THE LETTER?

Thank you for asking, I’d love to. It is a romance, of course, a story of love lost and then found again. On the eve of their wedding, Michael, the Earl of Daventry, believed the woman he loved, Lady Diana, betrayed him. Eleven years later, he receives a letter from his cousin, Leo (now dead), that changes everything he thought he saw that night. Reunited, Michael and Diana must struggle through the lies and secrets of the past if they are to find the happiness that was stolen from them.  Michael, a man always with a plan, brings Diana to London, determined to see her reinstated into polite society. Diana, after years of abuse at the hands of Leo, the man she was forced to marry because of the scandal, feels she has lost herself. Her journey is one of rediscovery, of finding her lost spirit.

What inspired you to write THE LETTER?

Michael popped up in a cameo role in THE TRAINING OF A MARQUESS, and I knew he would be my next book. What his story was, I wasn’t sure so I let the idea of him percolate in my mind for awhile. One morning, I woke up with the words of a letter in my head and took it from there. The letter begins the book, and it is not a love letter, but one from a vile, evil man.

Can you tell us a little bit about Michael Jeffres, Earl of Daventry, Lady Diana Brantley, and of course, Leo Standish, Baron Brantley?

Well, hello, Michael. This is a pleasant surprise. I don’t know, let’s ask. Michael would like to answer this question, so I hope you don’t mind if I step aside for a moment.

Michael sketches a bow. “I am honored to be among such lovely ladies. I trust you don’t mind my intrusion, but I feel I’m better qualified than Sandra to answer this question. So, you would like to know a little about me?” He flicks an invisible piece of lint off his coat sleeve. “Although I am half French on my mother’s side, I am British through and through. Diana sometimes accuses me of arrogance, but I’m quite sure she only says that to tease me.”

Michael scowls. “She did leave me once after we were reunited, said I had control issues, whatever the devil that means. Called me a donkey’s ass, actually. What she seems to have trouble understanding is that I protect what’s mine. My biggest regret and the worst mistake of my life was not protecting her when it mattered the most. Once she was back in my life, I vowed to keep her safe at all cost.”

Shakes his head. “Well, that is neither here nor there. I’ve since learned the art of compromise. I’m not sure you modern ladies can appreciate how difficult a thing that was to learn for a Regency man. But enough about me. I would rather tell you about my beautiful Diana. When I found her again, she was a beaten down thing, couldn’t bear the touch of a man because of her treatment at the hands of my cousin, may he rot in hell for all eternity and then some.”

“I likened her to a butterfly that had lost its wings, and I was determined to see her laugh again, to see her eyes sparkle with happiness once more. I had a plan, of course, but no one was more surprised than me when she surpassed all my expectations to the point any desire I might have harbored for a biddable wife…well, I have since come to the conclusion that a biddable wife makes for a boring wife.” Chuckles” “Is that what you ladies of today call enlightenment?”

“As for my cousin, Leo,” Michael says, his eyes turning to ice, “all I wish to say about the blackguard is that he was pure evil and I long for him to come back to life so that I can run a sword through his black heart.”

“Ladies, it has been a pleasure meeting you, I assure you, but I hear my Diana calling my name.” His lips curve into a wickedly sensual smile. “She is in her bath and I promised to wash her… back.” He bows and then strides from the room.

What makes Michael and Diana special to you?

Hi, I’m back. I hoped you enjoyed your visit with Michael, a very special man, indeed. Of course, he’s handsome as sin, but what I love most about him is he makes me laugh. His antics in winning back Diana after she leaves him…well, how could I not adore a man who writes love letters using cats as an enticement.

As for Diana, my heart aches for her. I really didn’t intend for her to be so damaged but could only admire her resolve to be happy again. My favorite scene for her is when she gets irritated with Michael and pokes him in the chest, something she would have never done to Leo. It is the moment when she fully understands she is in control of her life again. I’m tearing up just thinking about how that must have felt for her.

What is your favorite thing about writing?

Seeing a story come to life. It usually starts happening somewhere around the third or fourth chapter when my hero/heroine starts talking to me.

Who are your favorite authors you like to read?

Oh, goodness, there are so many. Here’s just a few. Pat Conroy, his words are like music to my ears. As for Regencies, I love Grace Burrowes, Courtney Milan, Joanne Bourne, Jo Goodman, Jo Beverly and Mary Balogh. Truly, I could probably fill a page with authors I love to read.

I am. I’m working on two projects at the moment. I recently finished book two of my contemporary series of the men of K2 Special Services, all of them ex-SEALs. Book one, CRAZY FOR HER, finaled in RWA’s Golden Heart®. I’ve put book two aside for a few weeks before I start on revisions to work on the revisions for KATIE, LOVE, the Duke of Aubrey’s story (he made an appearance in my two published Regency books).

Final question, if you were to write your own life story, what would you call your book and why?

I love this question. I’d call it, THE ONLY THING MISSING IN MY LIFE IS A CAT. Why?  I’m married to the man I love and have done pretty much everything I’ve set out to do (found a publisher that believed in me, jumped out of a plane, rode a Harley for years), but I don’t have a cat. I want another one so bad, but hubby and daughter-in-law are allergic. I guess out of consideration for them, I’ll just keep on wanting.

I’m so glad you stopped by today. Is there anything you would like to say before leaving us today?

There is. Thank you so much for inviting me and Michael (although I’m not entirely sure you invited Michael, but those Regency men….they feel they’re entitled to appear where ever they wish).  I’ve had tons of fun! THE LETTER is the story of a betrayal that wasn’t. Even so, it still tore apart two lovers for eleven years.

On the eve of their wedding, Michael Jeffres, Earl of Daventry, found his betrothed— the woman who meant as much to him as the air he breathed—in bed with his cousin, Leo. Diana remembers nothing of that night. All she knows is that she was forced to marry Leo and then spent the next eleven years in hell.

When the two lovers are brought back together by a letter from Leo a year after his death, Michael and Diana must struggle through all the lies and secrets before they can find a love that far surpasses the one of their youth.

Author Bio:
Sandra lives in the beautiful Blue Ridge Mountains of North Carolina. Most days, you can find her with her fingers on a keyboard, her mind in the world of her imagination. It's a land where romance and happy endings exist, a land where anything is possible.
When her husband can drag her away from her computer, she likes to travel with her very own hero in their RV, but she always brings her laptop. There are still stories to write, after all.
A few highlights of Sandra's life she fondly recalls are jumping out of a plane, flying upside down in a stunt plane, and riding her Harley in the mountains of Southern California and along the coast of Maine. She's managed a private airport and held the position of General Manager of a Harley-Davidson dealership.
Although those events in her life were great fun, nothing compares to the joy and satisfaction she gets from writing her stories.