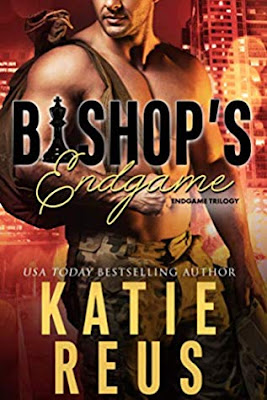 I finally got around to Bishop's Endgame. I don't know why I procrastinated on this story, because it was the perfect ending to the trilogy. Throughout the trilogy we hear about Ellis, but he's not seen or heard from for since he "murdered" his best friend. Always in the background until his story. Now he's trying to prove his innocence, which is a tough feat when the cards are stack against him. He has the feeling that taking the daughter of the one who killed his friend was the way to do it. Sounds like a winning plan.

However, there are a few things that he wasn't counting on when he kidnapped Arianna: 1. She wasn't like her step-father. 2. Sweet caring person. 3. Willing to help him. There's no love lost between Arianna and her step-father. When she learns more about her step-father it's an easy choice to help Ellis.

I love Bishop's Endgame, because we bring in Evie his sister. We get to see Lizzy from Redstone books. And we also get to see another character that has popped in a few series here and there. Overall, a perfect ending to a trilogy. We have Ellis managing to redeem himself. Since he was the last Bishop to find happiness, I guess it's time to move on to a new series.

Copy provided by author.
Posted by Melody May at 8:43 AM