All The Way by Kristen Proby (Review) 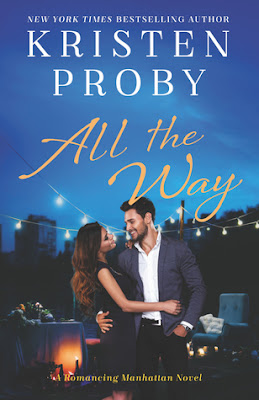 Let me start by saying I was super excited to see that Kristen Proby  had a new series coming out, and it was a must read. So, I got my little hands on All The Way. I started reading, and I liked London Watson and Finn Cavanaugh. They were both pretty good characters at the beginning. As the story progress, I had trouble liking London. I think part of my problem with her was she would get upset with Finn for doing somethings, and he wouldn't understand why she was upset. I was even having a hard time understanding her reasons.

Anyway, the story was pretty much them getting to know each other, but they needed to work more on their communication skills. They seriously were lacking, but that's understandable with new relationships. All The Way was an all right story. I wish they would have played up the brother's addiction problem a little more, instead of having it all come out in the end. There were a few things I was thinking London was a bit naive in thinking. I liked Finn a lot more than London. I just couldn't generate any sympathy for her. I think if there was a little more backstory between her brother and herself I would had more. All The Way was a pretty even keel read with London and Finn getting it on a lot. It wasn't bad, but it was a little too much at times. I'm hoping the series is a little better, and this was just this is the first book and it's going to get better. Overall, it wasn't a bad read, but not a great one. One of the things that I love about this book was the cover, because it does match a scene in the story.