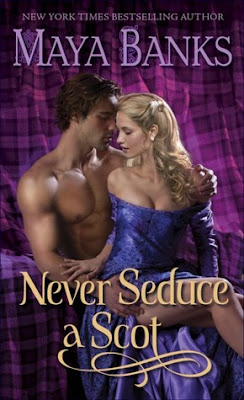 Never Seduce a Scot was AMAZING! I couldn't stop listening to the story. So, we have two clans that are at war with each. The king decides to intervene and force the Montgomery and Armstrong clans to a blood treaty. Also marrying Graeme Montgomery to Eveline Armstrong. Basically Graeme believes that his wife to be is touched, not all there, so he fears that he's not going to have a proper marriage. However, there's nothing wrong with Eveline other than she's can't hear. Yet, she didn't want her family to know that she was fine, because she didn't want to force to marry Ian McHugh. She felt that she would be better off with Graeme.

Talk about getting your heart ripped to shreds, Eveline is hated, because of her last name. An Armstrong in the Montgomery territory never was a good thing. Even though she couldn't hear, she could understand the awful things that were said about her. However, I love that she was so strong, when the women tried to be catty and spiteful. It took a long time for Graeme to realize that she was being tormented. Such a strong lass, and I absolutely love Eveline. Even when faced the danger she was absolutely strong.

I did love Graeme too. I love how he grew to love his wife, and seeing how precious she was. Even though she couldn't hear, he never underestimated her. Eveline was smart and beautiful, and eventually Graeme's people learned to love her.

Totally loved Never Seduce a Scot. Definitely a revisit kind of read. Since it was an audiobook, the narrator Kirsten Potter did a fantastic job. She absolutely had me spellbound from the first chapter to the last. She did an amazing job with all the characters, and made it a pleasure to listen. I totally would listen to another story if she was the narrator.