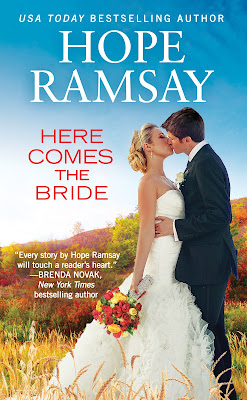 For Professor Laurie Wilson, planning her wedding to longtime boyfriend Brandon Kopp has been a whirlwind. But somehow, between all the cake tastings and dress fittings, she never imagined being left at the altar. In the aftermath, she does what any sensible woman would—she swigs champagne and considers keying his car. Until someone knocks on her door with a much better idea for revenge.


Best man Andrew Lyndon thinks Laurie's better off without Brandon. But Laurie's father—and Andrew's boss—isn't going to accept anything less than a reconciliation. And he's made it Andrew's problem to solve. So Andrew decides to make Brandon jealous by setting Laurie up on a string of "dates." After a couple of weeks, Brandon will be begging Laurie to take him back. But Andrew's plan works a little too well because suddenly he's the one falling for Laurie—and planning a proposal of his own.

Okay, Brandon is a jerk. Good thing he's not hero. Seriously, who waits until the day of the wedding and drops hey I think we should play the field before we get married. That's a loser. Laurie is better off without him, but it's going to take some convincing on a few people's part. Yes, Hope Ramsay brings another fun fill small town romance in Here Comes the Bride. Don't get me wrong, Laurie is a bit lost at the beginning of the story. I mean she's wasted 10 years of her life with the loser. Everyone seems to want her help her move on or try to make Brandon jealous. However, there is an underline scheme going on that Laurie and Andrew have no clue is going on. Honestly, I didn't know it was going on at the time. Then again it's a small town romance.

So, we have three main characters in the story Laurie (the bride), Brandon (the runaway groom), and Andrew (the best man/ best friend). However, Brandon is mainly supposedly having fun while Laurie is trying to pick up the pieces of her life. Fortunately, she has Andrew in her corner. However, those two have a better connection than Laurie and Brandon ever did. Okay, I wasn't sure if I was going to like Laurie. She's a little high strung for me, but she did get humiliated by her fiancee. Then we have sweet, reliable Andrew. He's kind of torn by the situation, because he wants to be there for his best friend at the same time he sees the havoc he has caused. In essences he's stuck in the middle. Of course things get a little complicated, okay it gets super complicated. As I got closer to the end I was a getting a little worry that Laurie would take the easy way out. Oh my goodness that would be such a horrible mistake.

Anyway, I did enjoyed Here Comes the Bride. The beginning was a little rough for me, but then again we did have a runaway groom, and a devastated bride. After I got through the first couple of chapters the story started to flow and I was totally waiting for Andrew and Laurie to hook up. By the way you will be waiting for sometime. Still a satisfying read. 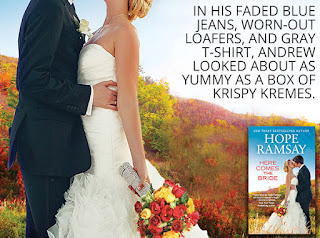 
Laurie was busy killing her waistline with her days-long ice cream, popcorn, and pizza binge. But hey, she didn’t have to worry about fitting into the beautiful lace wedding dress anymore. And binging on junk food and all twenty-six episodes of the first two seasons of House of Cards kept her mind off her troubles.
But she hadn’t watched more than fifteen minutes before someone knocked on her front door. Damn. Couldn’t people just leave her alone? But then whoever it was decided to peep through the gigantic living room window that overlooked her rickety porch.
Laurie’s heart soared. The visitor who pressed his face up against the grubby window pane was definitely male. For an instant, she thought it might be Brandon, come to tell her that calling off the wedding was a horrible mistake.
But the guy on her porch was taller and thinner than Brandon. “C’mon, Laurie, open the door,” he said as he raised a green and red donut box. “I brought Krispy Kremes.”
Speak of the devil. Andrew Lyndon himself. The best man. With donuts.
She hauled herself up from the couch and padded to the front door. She cracked it open. “I’ll take the donuts, please.” She reached her hand through the narrow opening.
He cocked his head like an adorable puppy with big, soulful eyes. “You don’t get the donuts unless you let me in.”
“I’m not dressed for company,” she said, glancing down at her pink bunny slippers, gray sweatpants, and George Washington University sweatshirt. She’d been wearing these clothes since Sunday afternoon.
“I’m not company,” he said.
“No? Then why are you here bearing bribes?
Andrew’s mouth twitched. “Your dad sent me.”
How could you not like Andrew when the guy always told the truth? He was dependable. And honest. “Why did he send you and not come himself?”
“I don’t know. I’m here to talk to you about an idea.”
“What kind of idea?”
Andrew looked away and to the left, his body language screaming discomfort.
Laurie was suddenly intrigued. She opened the door wide and knew a moment of humiliation as he scanned her from head to toe. She hated the look in his eyes. Was it pity? She didn’t want anyone, least of all Brandon’s best friend, to pity her. “So what is this idea?”
“Teaching Brandon a lesson.”
“How? And why would you be interested in doing that? I mean, you’re his friend, right?”
He looked her straight in the eye. “Yes, I am. And I also work for your father.”
“Right. So conflicted.”
He nodded. “Your father wants to help you and Brandon get back together. He’s enlisted my help.”
She snatched the box of donuts from his hands. “I’m really sorry, Andrew. He can be a pain in the butt. But thanks for these.” She clutched the box to her breast and tried to shut the door in Andrew’s face.
Unfortunately, Andrew had good reflexes. He wedged his foot in the door and forced it open.
She retreated in the face of his superior strength, but not without a snarky retort. “I’m not sharing the donuts.” She selected a donut from the box and nodded her head at him. “Okay, you’ve got exactly five minutes for whatever it is you came to say.”
“On Saturday, when I asked you what you wanted, you told me that you were willing to forgive Brandon. Do you still feel that way?”
A rush of sugar coursed through her as she sank her teeth into the donut. There was nothing in the world—not even sex— as good as a Krispy Kreme. She thought carefully about Andrew’s question as the donut melted in her mouth. “I don’t know,” she said honestly.
Andrew nodded, as if her answer hadn’t surprised him in the least. “He broke my heart,” she added, just to be clear. “How can I forgive that?”
“Easy. If you love him and want to be his wife.”
“Not so easy. I mean, why did Brandon do that to me? We were together for so long.”
“What if that’s the problem?” he asked.
“What? That we’ve been together? Like it’s okay for him to get bored?” Although that’s exactly what had happened.
Andrew shook his head. “No, it’s more like fear of better options.”
“What does that mean?”
“Maybe he feels as if he never took the time to…I don’t know, play the field, sow some wild oats, whatever.”
“Right.” She took another bite of the donut. In a minute, she would ask Andrew to leave, and she would forget this unsettling conversation.
“So,” he said when she was down to licking the sugar off her fingers, “what if we showed Brandon the consequences of looking for better options?”
“Okay. And what, in your judgment, are the consequences?”
“I’m pretty sure Brandon hasn’t thought through how he might feel if you decided to go out and play the field.”
“So you’re saying that if I do what Brandon asked me to do—go explore other options—it will make him jealous?”
“Well, sort of. See, I’m not suggesting that you actually date other people. I’m suggesting that you give the appearance of dating other people. In order to make him realize what an idiot he’s being.”
“Okay, how do I give the appearance of dating? What do I do, just go directly to Match.com and post a sexy profile?”
He leaned back in the chair, looking so completely comfortable that it irked her. “Instead of Match.com, I was thinking along the lines of setting you up on a series of show dates, with guys Brandon either knows or admires or even hates. In short, guys that will annoy the crap out of him. We’d arrange them so that Brandon either sees you out with someone else, or hears about it. I’m betting that seeing you out with someone else will drive him crazy.”

THE CHAPEL OF LOVE SERIES

Hope Ramsay is a USA Today bestselling author of heartwarming contemporary romances. Her books have won critical acclaim and publishing awards. She is married to a good ol' Georgia boy who resembles every single one of her Southern heroes. She has two grown children and a couple of demanding lap cats. She lives in Virginia where, when she's not writing, she's knitting or playing her forty-year-old Martin guitar.