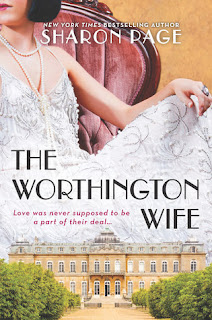 Sharon Page sparkles in this poignant and irresistibly entertaining follow-up to her breakout novel, An American Duchess

Lady Julia Hazelton is the most dazzling among 1920s England's bright, young things. But rather than choosing the thrill of wanton adventure like so many of her contemporaries, Julia shocks society with her bold business aspirations. Determined to usher the cursed Worthington estate into a prosperous, modern new era, and thus preserve her beloved late fiancé's legacy, the willful Julia tackles her wildest, most unexpected adventure in Cal Carstairs, the reluctant new Earl of Worthington.

The unconventional American artist threatens everything Julia seeks to protect while stirring desires she thought had died in the war. For reasons of his own, Cal has designed the ultimate revenge. Rather than see the estate prosper, he intends to destroy it. But their impulsive marriage—one that secures Julia's plans as well as Cal's secrets—proves that passion is ambition's greatest rival. Unless Cal ends his quest to satisfy his darkest vendetta, he stands to ruin his Worthington wife and all her glittering dreams.

I loved The Worthington Wife. At first I was a little hesitant, because I liked An American Duchess, but wasn't in love with the story. I did struggle with the story. However, with The Worthington Wife I was enthrall with the story. After An American Duchess Julia decided she needed to find herself. She thought she was in love with the doctor, but he decided she wasn't worth the fight. Basically, she finding her way and decided that she's not going to marry and make it on her own terms. Julia wants to help women that were hit hard after the war. I love Julia, because she has a big heart throughout the story. She was willing to help the new Earl of Worthington that Worthington is more than just land to be sold off for vengeance.

Now Cal is out for blood. He's been hurt bad by the Dowager Countess of Worthington, and he figures that destroying everything the Dowager holds dear will help him gain what he desires. However, he never counted on meeting a girl like Julia, who is passionate about what she cares about. She slowly worms her way into his heart.

Totally loved The Worthington Wife. I love the heat that passes between Cal and Julia. Watching them made in a puddle of goo, but Julia stuck to her principles. However, you see Julia's best friend go through some changes throughout the story too. Sharon kept me wanting see what happen next. Now those who love Downton Abbey will love this story, because we do see more of the servants in this story than we had in the previous book. They actually play a huge part in the story, because they have a lot to fear for with the new Earl. Overall, The Worthington Wife was a page turner and I can't wait to see what else Sharon comes up with next. I hope it's Julia's younger sister or Cal's cousins. The mother of two children and wife of a terrifically supportive husband, Sharon has a degree in Industrial Design and worked in structural engineering before fulfilling her dream of becoming an author.

http://tlcbooktours.com/2016/11/sharon-page-author-of-the-worthington-wife-on-tour-januaryfebruary-2017/
Posted by Melody May at 8:56 AM