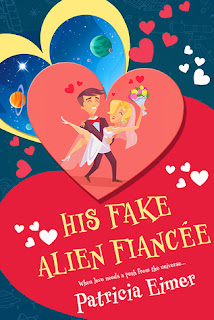 When I started His Fake Alien Fiancée, I wasn't sure what I got myself into, other than the title and the cover caught my attention.  When I started reading the story, I felt I was missing something, which I was. So, I would recommend reading Out of This World first, because there are somethings I would have benefit knowing. Anyway, we are going to press forward.

So, I read His Fake Alien Fiancée and I wasn't sure if I was going to keep going. I was considering quitting the book about 21%, but I continued on. You know what the story grew on me. Not something I would normally read, but it was interesting. We have Brandt who is emotionally stunted. He chooses to lack the ability of committing, because of what his father did when his wife was dying of cancer. So, he used women and women let him. However, when he was around Perri he restrain himself. So nice of him. Anyway, Perri is alien princess and there is more on how she ended up on this planet. She's still learning the ways of being an earthling.

In some ways I'm glad, I didn't give up on the story. I wasn't sure how I felt about Perri. At the beginning she's not sure about herself, but I did like her character growth. However, it's a little slow, but towards the end I did like her. She's sweet and kind, and a bit wholesome. Brandt I liked in the beginning, but as the book progress I sorta didn't like him. Eventually, he gets his head screwed on right.

Overall, not a bad read. Definitely different. In some aspects it reminded me of Men in Black, so that was kind of cool. Would I read more from this series, the jury is still out. However, I was interested in reading the book, because the cover who knows.