The Bad Luck Bride
The Canvensham Heiress, 1
Janna MacGregor
May 2, 2017 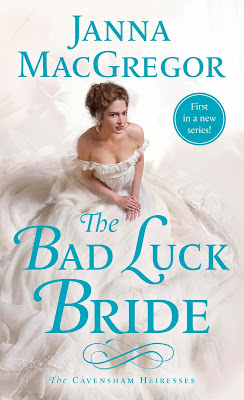 All were shocked at the announcement of the “cursed” Lady Claire Cavensham to Lord Alexander Hallworth, the Marquess of Pembrooke, especially since she is already engaged to another unfortunate Lord. Perhaps she will make it to the altar this time with one of these fine gentlemen! —Midnight Cryer

No one is left breathless at the imperious pronouncement of her engagement to Lord Pembrooke more than Claire. She hardly knows the dangerously outrageous man! But after three engagements gone awry and a fourth going up in glorious flames, she isn’t in a position to refuse...

Alexander requires the hand of his enemy’s fiancée in marriage in order to complete his plans for revenge. It’s his good fortune that the “cursed” woman is desperate. However, what begins as a sham turns into something scandalously deeper...

Excerpt:
Alex smiled in earnest. “I would never allow you to be humiliated in front of society. I’m trying to help you.” Somehow, he had to convince her of that fact, then the idea of marrying him would be much easier to accept.
She blinked rapidly, then turned back to him and, for an instant, appeared startled to see him there. “That’s very gallant, my lord. Truly, thank you for the effort. But I must leave.”
This night could not end with her escaping, so he tried another tactic. “You need to protect your Wrenwood estate and your wealth from lechers who would feed upon your vulnerability. Not to mention stop that ridiculous curse.”
“I have two.” She held up two gloved fingers.
“Two? Two what? Curses?” No one at his club had uttered a peep about another curse.
“Estates. I have two estates, Wrenwood and Lockhart.” She returned his stare.
Her answer was unexpected, but his business experience had taught him to show nothing. The report from his private investigator had not mentioned additional properties. Thoughts were percolating if she chose to disclose this information.
A razor of lightning split the sky. She flinched and took a step closer to him, but her reaction had nothing to do with him. It was the storm.
Her gaze darted to the exit of the alcove, then she returned her attention to him. With a slight shrug of her shoulders, his evening jacket fell into her hands. She offered it to him. “My lord, good night.” Outside their hideaway, the voices of a man and a woman floated in the air.
Alex put his hand on her shoulder to prevent her escape. “Will you give me some assistance? I seem to have lost my valet.” He quirked an eyebrow. “Besides, if you leave now, whoever is out there will see us.”
She ventured a halfhearted grin and held his jacket in two hands. With a little persistence, he wrestled his way into the evening coat. Her hands smoothed the material across his shoulders and back, causing a pleasant sensation to cascade through him at the slight touch.
Claire took several steps toward the pathway. In a flash, he moved beside her and grasped her elbow. When he brought her close, something flared between them as he gazed into her haunted eyes. Whether the desire to keep her next to him was passion or the need to protect a vulnerable woman made little difference. He pulled her into the shadows and brought his mouth to her ear. “Wait until they pass.” The warmth from her skin beckoned.
A flash of lightning lit the gardens and the alcove.
With a gentle hand, he pushed her against the wall and stood to the side so he blocked her body from view.
A clap of thunder cracked as if the sky were breaking. It rolled into a loud rumble that refused to die.
“Please.” Her whisper grew ragged as she struggled for breath. In one fluid motion, she pulled the lapels of his evening coat toward her. She buried her face against his chest and pressed the rest of her body to his, almost as if she sought sanctuary inside. “Don’t leave me.” Her voice had weakened, the sound fragile, as if she’d break into a million pieces.
“I won’t. I promise.” Alex pulled her tight. One hand sank into the soft satin of her skirts while the other slid around the nape of her neck to hold her close to his chest. It was the most natural thing in the world to hold her. Her body fit perfectly against his.
With the slightest movement, she pulled away. Her eyes wildly searched his. For what, he couldn’t fathom.
He lowered his mouth until his lips were mere inches from tasting her. Madness had consumed him. All he wanted was to kiss her thoroughly until she forgot her fear—until she forgot everything but him.
Her breath mingled with his, and the slight moan that escaped her was intoxicating. Nothing in his entire life felt as right as this moment. He bent to brush his lips against hers.
“Pembrooke? Have you seen Lady—”
Claire leaned back and released his lapels. Without her warmth, he experienced a sudden loss of equilibrium. He turned with a snarl to greet the intruders.
Immediately, Lord Fredrick Honeycutt and his sister, Lady Sophia, took a step back as their eyes grew round as dinner plates.
The first to recover, Honeycutt announced, “I see you found Lady Claire.” He bowed his head slightly, then lowered his voice. “The Duke of Langham is looking for his niece and is directly behind us.”
A sense of wariness flooded Alex’s mind when Claire’s uncle strolled forward and came into sharp focus. As he stood, his feet spread shoulder width apart, the duke’s presence commanded everyone’s attention. His visage held the hint of a smile, but the two large fists resting by his sides were the real barometer of his mood. “Claire, are you all right?” The affection in his voice was at odds with the fury flashing in his eyes.

Copyright © 2017 by the author and reprinted by permission of St. Martin’s Press.

The Bad Luck Bride is the first in a new Regency romance series from Janna MacGregor!

Author Bio:
Janna MacGregor was born and raised in the bootheel of Missouri. She credits her darling mom for introducing her to the happily-ever-after world of romance novels. Janna writes stories where compelling and powerful heroines meet and fall in love with their equally matched heroes. She is the mother of triplets and lives in Kansas City with her very own dashing rogue, and two smug, but not surprisingly, perfect pugs. She loves to hear from readers. The Bad Luck Bride is her first novel.