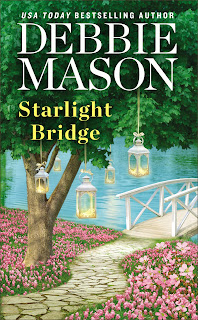 A few weeks ago I read Starlight Bridge, and I thought I was going to hate the story, because of one of the character. The problem was she's a secondary character, but at the same time she kind of plays a major role in Griffin Gallagher's life. Seriously, I wanted to throat punched Lexi. I wanted to throat punched her for most of the book. To top it all off she's pregnant, so I was torn because of her character. However, the urge to throat puncher was overwhelming. As the reader I shouldn't be focusing on Lexi, but more on Ava and Griffin's second chance at love. Even then I wasn't sure how I felt about that. Yes, Griff should have probably have tried to figured out why his wife loved him so much then all of the sudden wants a divorce. Then again they were young and both a little hot headed.

Don't get me wrong I did like Ava and Griffin's reunited love, but every chance they would draw closer so one would try to tear them apart. I didn't have a problem with Colleen as the ghost, because she's the only one who was on team Ava.

Overall, Starlight Bridge wasn't a bad read once the situation with Lexi got taken care of. How it was handle was a bit overdramatic. I didn't have problem wanting to throat punch Lexi, but having her redeemable was a little too much. I liked Griff and Ava, and they are good together. So far, the Harmony Harbor books aren't grabbing my attention like her Christmas books. I'm not sure I want to continue. On one side I do, because I have to see Colleen get to her final resting place, but at the same time, do I want to deal with the series. There are a ton of people who love this series. I don't know.