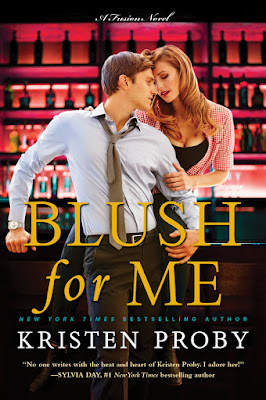 About BLUSH FOR ME:


As the take-charge wine bar manager of Seduction, Portland's hottest new restaurant, Katrina Meyers is the definition of no-nonsense, and she isn't afraid of anything. Well, almost anything: she hates to fly. When she's forced to travel on a death trap with wings, the turbulence from hell has her reaching for any safe haven—including the incredibly handsome guy sitting next to her.

Ryan "Mac" MacKenzie hasn't been able to get his sexy seatmate out of his head. The way she clung to him stirred something inside him he didn't think existed: tenderness. As the owner of a successful wine touring company, Mac thinks he's got a handle on what life can throw at him and he's not prepared for any surprises, especially in the feelings department. And when he brings a tour into Seduction, he sees the petite spitfire he just can't forget.

Mac is determined to discover what else they have in common besides fine wine and the inability to keep their hands off each other. But what will it take for two stubborn people to realize that what they have is so much more than a hot chemistry between the sheets and to admit to falling in love…?

“You look like you’re feeling better.”
Mac. That’s Mac’s voice in my ear. A shiver runs through me as I turn around and look up, way up, into his green eyes.
“I am,” I reply and take a sip of my wine. Was he that good looking on the plane? “I didn’t realize you were attending this conference.”
“You had other things on your mind earlier,” he says smoothly and motions for the bartender. “I’ll have what she’s having, and another for her as well.”
“What if you don’t like pinot?” I ask and tilt my head to the side.
“I like it all,” he says with a wink.
Oh my.
“Do you know many people here?” he asks, nodding toward Sally who has moved on to chat with another group of people.
“A few. I’ve not met most of them in person, unless they were up in Washington or Oregon. How about you?”
“Same,” he says with a grin. “This is my first conference down in Napa Valley. And it’s off to a great start.”
“Right.” I laugh and shake my head. “Dealing with a crazy chick on the plane is exactly the best way to start your trip.”
“It is,” he says and looks me dead in the eye. “She wasn’t that crazy. She was scared. There’s a difference.”
“Well, she’s fine now.”
“I’m glad.” His lips tip up into a smile and my stomach clenches. He has a dimple in his left cheek.
I want to lick it.
I take a sip of my fresh glass of wine and smirk to myself. Perhaps Mac fits the sexcation bill.
“What just went through that gorgeous head of yours?”
“I’m not drunk enough to tell you yet,” I reply honestly. Mac’s eyes widen briefly, and then he simply smiles at me.
“There’s a lot of wine in this place.”
“Thank God for that.”
A few hours later, after chatting with many people, new and those I already know, including Mac, he escorts me up to my room.
Sexcation.
But when we reach my door, he leans in and kisses my cheek. Just the cheek. I frown up at him.
“This is supposed to be a sexcation, not a fucking dating game.” It’s a grumble, but I’m shocked to hear it actually leave my lips, rather than stay in my head where it’s supposed to be.
“A what?” Mac asks.
“Nothing.” I shake my head and pull my key card out of my handbag. “Good night.”
“Kat?”
“Yeah.” I look back at him and sigh a little at the sexy dimple in his cheek and the way his shirt pulls against his shoulders as he leans on the doorframe.
“I’ll see you in the morning.”
“It’s already morning,” I remind him.
“It won’t be too long, then.” 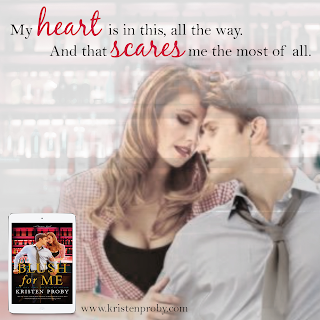 My Thoughts:
Okay, I had a late start getting this book read. So, I'm 40% into the story. Started at 4:30 this morning.  By the way it's pretty good. Mac and Kat, well they are pretty awesome. Anyway, I'm going to get back to read this book. I should have it up later this afternoon.

Here's my thoughts on the Blush For Me:
Where do I beginning. I mean Kat is totally awesome. She's a unique heroine. She loves dressing up in 1950s girl, but she's a badass cause she has a sleeve tattoo. She's sweet and tough, and doesn't take shit. She has no problem calling other people out and giving them what they deserve. When Mac meets her, he's intrigue by her, because she's not like the other girls he's dated. I mean when the girl calls you out on your crap and you kind of like it, you're a goner already.

Blush For Me is pretty laid back for a story. We have boy meets girl and they have fun over the week. Girl gets upset when he doesn't call, but realizes that she was the idiot and didn't give him her number. He pops into her life, and have a rough start, because he omitted some information. Anyway, they hit it off. Sounds like a hunky-dory read. However, drama is the spice of life, and makes the story much better. Yes, there is a little drama and it's super subtle. If you blink you might miss it. I'm not kidding it's extremely subtle, and it gets a little rush towards the end. However, It's a pretty good read. Mac and Kat are fun to read, because Kat definitely keeps Mac on his toes. I seriously can't wait for the next story. I'm not sure who will be next Mia or Riley, but I can't wait for either these two cause it will be fun. I kind of hoping it's Mia, because she needs someone to see her true beauty.

I think this line fits the story the best:


"Just because you're breathing doesn't mean you're alive. You've made me feel alive..."

Both Mac and Kat weren't really living until they met one another. 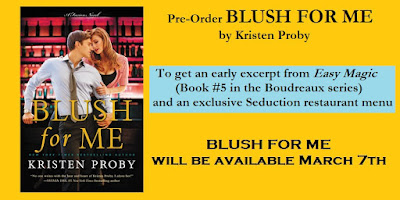 Preorder BLUSH FOR ME, fill out this form, and receive an email with the Early Excerpt from Kristen Proby’s EASY MAGIC (Book #5 in her bestselling Boudreaux Series) and an exclusive Seduction restaurant menu after Release Week!

And Don’t Miss the First Two Novels in the Fusion Series!

New York Times and USA Today Bestselling author Kristen Proby is the author of the bestselling With Me In Seattle and Love Under the Big Sky series. She has a passion for a good love story and strong, humorous characters with a strong sense of loyalty and family. Her men are the alpha type; fiercely protective and a bit bossy, and her ladies are fun, strong, and not afraid to stand up for themselves. Kristen lives in Montana, where she enjoys coffee, chocolate and sunshine. And naps.

Don't miss all the stops on the BLUSH FOR ME Tour!