Debbie's Top 5 Songs That Inspire You To Write Mistletoe Cottage

1)The Tenors’ “Who Wants to Live Forever” with Lindsey Stirling is one of the songs I listened to every morning before sitting down to write Mistletoe Cottage. It fits the book perfectly, and not only because Liam and Sophie’s story opens on Halloween.

2)It doesn’t matter which book I’m writing; I listen to “Fight Song” by Rachel Patten. It’s like the anthem for all my heroines and Sophie’s no exception.

3)Gerard Butler singing “Galway Girl” in P.S. I Love You inspired the win-the-girl scene at the Salty Dog in which Liam performs for Sophie.

4)Sophie sang and Mia mimed “Let it Go” from Frozen in one of my favorite scenes in Mistletoe Cottage. Letting it go was also something Sophie had to do if she and Liam were going to get their second chance.

5)I don’t want to give anything away, but one of the songs I listened to while writing the end of Mistletoe Cottage was “Marry Me” by Train. 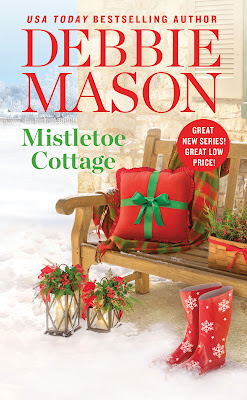 'Tis the season for love…

Sophie DiRossi loved growing up in Harmony Harbor. But after fleeing in disgrace many years ago, it is the last place she wants to be. Left homeless by a fire, she's forced to go back to the small coastal town that harbors a million secrets, including her own. Sophie sees this secret reflected every day in her daughter's blue eyes—and she must keep it hidden from the only man she has ever loved.

Sophie's return is a shock for everyone…especially Liam Gallagher. The firefighter had some serious feelings for Sophie-and seeing her again sparks a desire so fierce it takes his breath away. Now Liam will do whatever it takes to show Sophie that they deserve a second chance at love, even if everything they've concealed threatens to keep them apart. In this special town at this special time of the year, Sophie and Liam can only hope for a little holiday magic...

Let's start off there might be spoilers, but I will try not to give them. However, how the story is written I might accidentally give some and I want you to be forewarned. I normally love the secret baby trope. However, this one was a little crazy for me, and it did get a little weird. You don't see the weirdness until you get more into the story and things are reveal. Yeah, good times. This is where I had a lot of issue with Sophie. She had her reasons to keeping her child a secret for almost eight years and things are reveal. Oh boy, are they revealed. Majority of the story I had a hard time, and when Sophie for gave Liam I was seriously, you are going to forgive him. They had there issues to workout which stem from Sophie's child. Okay, we have covered my issues with Mistletoe Cottage.

What I liked about the story:
I like how Debbie brings about her new series, because we see the antics of Paige and Hazel who would love to see Greystone destroyed and made into a condominium. Yet the town seems to pull together to avoid from happening. At same time we don't see them doing these antics just the aftermath. At the same time we have a town filled with secrets that need to be rectify, this adds intrigue to what everyone is keeping in there secret closet. We had Sophie and Liam's secrets reveal and they have manage to find a happy ever after, now I'm curious whose secret will be reveal next. I'm actually dying to know and this one. How the ending is it leaves you guessing who is next, the agony.

Even though, Mistletoe Cottage started rough for me I did like how the story ended, and I did like how it leads you wanting more. If you are not a fan of secret child stories it might be a little rough, but it's gives you a hint of a town full of scandal. It definitely gives you that small town feel, but not everyone knows what is going on. 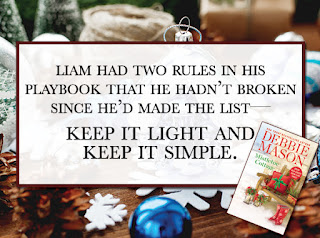 Debbie Mason is the USA Today bestselling author of the Christmas, Colorado series. Her books have been praised for their "likable characters, clever dialogue and juicy plots" (RT Book Reviews). When she isn't writing or reading, Debbie enjoys spending time with her very own real-life hero, their four wonderful children, an adorable grandbaby, and a yappy Yorkie named Bella.


a Rafflecopter giveaway
Posted by Melody May at 8:51 AM