It seems like I have been knocking out more Blogger Shame reads this week than I have in the last eight months. Woot! However, I still have many to go. I'm truly hopeful that I will be able to knock 18 I have left to go. A huge feat, but I'm up to the challenge. Today we will take a look at The Prince's Runaway Lover by Robin Covington: 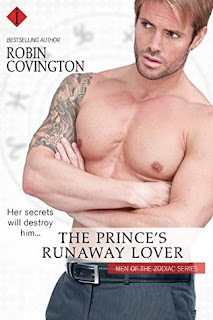 In the past I have enjoyed Robin's previous books. I still enjoyed The Prince's Runaway Lover. I mean whats not to love: 1) A prince 2) A woman with a secret past 3) Secrets, lies, and deceit. Sounds like it could be a real winner. However, the story started a little slow. It could be all, because Nick has been given this huge responsibility that he never thought he would have. The spare living the spare life, and now responsibility has been thrust upon him. Now his ruling might be in question. Good times. He's trying to find his way. Of course he stumbles upon a garden who catches his fancy.

Isabel is trying to live her life, and there is more than meets the eye. She carries some dark secrets that aren't reveal till closer to the end, but they could jeopardize Nick's chances at the crown. Nick's a walking scandal to begin with, but Isabel it could get worse.

Overall, a pretty good story. Once I got into the story it was fairly fast pace. Basically, a modern fairy tale. A prince wants the girl and willing to do whatever it takes to get the girl. If you are in the mood for something quick and happy ending, The Prince's Runaway Lover might be your read.