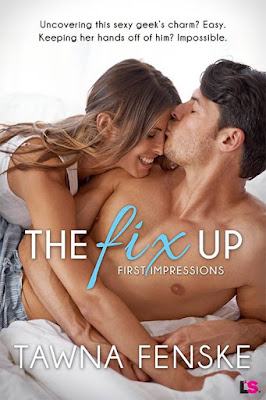 Uncovering this sexy geek’s charm is easy. Keeping her hands off of him is impossible.

While he may look like the love child of a movie starlet and an NFL linebacker, Ben Langley has the people skills of a half-drowned porcupine. Why socialize when there are chemistry labs and bad sci-fi flicks? If he has any hope of taking the helm as CEO of the family business, Ben needs an image makeover. Pronto.

Enter Holly Colvin, owner of First Impressions public relations and branding firm, and the woman who just saved Ben from the clutches of an over-attentive sales clerk. Holly’s rebranded hundreds of companies in her career, but she’s never rebranded a person. The guy clearly needs help, though, and she’s just the woman for the job.

With the clock ticking for them both, Holly and Ben face off over wardrobe malfunctions and business jargon that sounds a lot sexier than it should. But can Holly make Ben into the man he thinks he should be without losing the man she’s starting to love?

Get ready folks and meet Ben Langley. He's hot and sexy, but has no clue how to use those qualities. Deep down he's a totally geek who loves bad old sci-fi movies, and gets off talking about knowing facts. Seriously, I'm surprise he didn't have a collection of Mystery Science Theater 3000. Plus, he makes the information about the company he's running sound so dirty, but he doesn't have a clue. Uber cute. Plus, he's loyal to his friends. Sounds so dreamy. So, he hires Holly Colvin to help him rebrand him into more like his father, sort of. He's not quite sure he wants to be completely like his father. Trust me his father is a Grade A asshole who believes that women should be arm candy, or barefoot and pregnant and sitting at home. He sounds...awe-inspiring (insert eye roll). Basically, Ben is trying to find his footing in becoming the CEO.

Oh my goodness, The Fix Up is just fun. It had me chuckling with the underline innuendos. We watch Ben become the CEO he wants to be instead of a carbon copy of his father, thank goodness. Also, we have Holly learning that not all guys are assholes like her ex-husband and Ben's father. It takes sometime for her to realize that Ben is good guy. Plus, Holly and Ben are adorable together. I mean they watch bad sci-fi movies and thumb war one another, yes they do other stuff, but it's the cute stuff that counts. By the end the story, I'm wanting more from this series and I can't wait to see what Tawna cooks up in the next book. So, if you are looking for a laugh and fun, you might give The Fix Up a go.

Excerpt from The Fix Up:

The saleswoman turned and scurried away, leaving Ben to stare down at the wife now affixed to his arm. She tucked her hair behind her ear and glanced the direction the saleswoman had retreated.
“I hope I read that right.” The brunette scooted out from under his arm, and he instantly missed her softness. She looked up at him with those odd violet-gray eyes and smiled. “You looked like you were being eaten alive there, but too polite to tell her to back off.”
“Eaten alive,” he repeated, a little mesmerized by the woman’s eyes. “I’m not entirely sure.”
“Seemed like that’s what was going on. Salesgirl sees a big guy with a big budget and big—” she paused, then gave a small shrug. “Well, sometimes it brings out the worst in women.”
“Thank you,” he said, meaning it. “I’ve been flying back and forth between cities all week, so I’m a little jetlagged and distracted. I guess I wasn’t even a hundred percent sure I was being—uh—”
“Hit on? Ogled? Mentally undressed?”
“Right.” He cleared his throat. “Not until you pointed it out. Thanks for the rescue.”
“No problem. Pay it forward sometime.”
“Is that real? It’s huge.”
She blinked, then glanced down at the paperweight-sized rock adorning her ring finger. “Nah, I keep it in my purse for when I want to avoid getting hit on at ladies’ night.”
“Does it work?”
“Not with the real jackasses, which probably defeats the purpose, huh?”
He nodded, not sure what to say to that. “I’m sorry, what was your name again?”
“Holly. Holly Colvin. I’m the owner of First Impressions.”
“First Impressions?”
“We’re a public relations and branding firm that specializes in creating and remaking corporate identities.” She fished into her purse to pull out a business card. She held it out to him and Ben started to reach for it, but Holly withdrew her hand.
“Shit. Vampira the Sales Queen is headed back here.”
Before he could say anything, Holly was sliding her hand around to cup his ass. For a few beats, he thought she was copping a feel, and he hoped like hell she kept doing it. Then he realized she was tucking her card into his back pocket. She grinned and tilted her head back to look up at him.
“Gotta commit to the role, right?”
“Right,” he murmured, staring down into those slate-speckled eyes. “We certainly do.”
“I suppose we could throw in a little something extra if you really want her to buy it.”
“Like what?”
Her lips parted slightly, almost like she was braced for a kiss. Or was that his imagination? It seemed hot in here, and he was getting dizzy, and now all he could think about was claiming those perfect lips.
“I’m sure you’ll come up with something,” she murmured.
Her mouth looked so soft, so inviting, and he could have sworn her lashes fluttered low the way they might if she were waiting for him to make a move. A big move.
He knew what he needed to do. What he wanted to do.


And with that, he bent and kissed her.

Tawna Fenske is a romantic comedy author who writes humorous fiction, risqué romance, and heartwarming love stories with a quirky twist. Her offbeat brand of romance has been praised by Booklist as “A tame Carl Hiaasen on cupid juice,” and RT Book Reviews nominated her debut novel for contemporary romance of the year. Tawna is a fourth generation Oregonian who can peel a banana with her toes and who loses an average of 20 pairs of eyeglasses per year. She lives in Bend, Oregon with her husband, step kids, and a menagerie of ill-behaved pets.
Author Email: tawnafenske@yahoo.com