InkSlinger PR Spotlight + Review: Take it Off the Menu by Christina Hovland 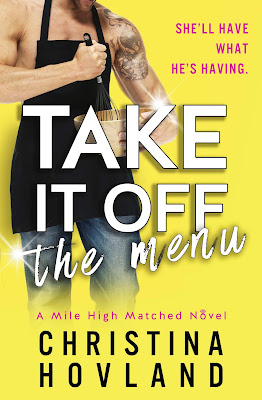 Saying "I Do" has never been such a mess.

Marlee Medford just got dumped. Yes, things have become ho-hum in her longtime relationship, but she was two days away from walking down the aisle with the man she thought was her forever when he called it off. Convincing herself that they'd be able to reignite their spark once the wedding craziness settled? That was easy. Suddenly finding herself without a fiancé? Not so much. Marlee needs to regain control of her life, and a weekend away with her friends is a solid first step.

One of Denver's best up-and-coming chefs, perpetual bachelor Eli Howard, isn't into serious relationships--especially the kind that ends in marriage. As if to prove his point that they aren't worth the trouble, the wedding he was supposed to be catering just fell apart. Feeling oddly protective of the jilted bride--his little sister's best friend--his weekend plans now involve a trip to Sin City with her group of friends. But it looks like he had a bit too much fun in Vegas when he wakes up married...wedding night included.

Marlee's attempts at getting her life back together are failing miserably. Her ex-fiancé is taking the house, her chihuahua is intent on a love affair with Eli's sneakers, and she's now accidentally hitched to the guy who can't even say the word marriage. With their quickie annulment denied, Eli and Marlee just have to hang tight until the divorce goes through. It's just a little divorce amongst friends, what's the worst that could happen?

Eli & Marlee's story is a pretty fun read. We have Marlee fiancé wanting to call off the wedding a couple of days before the wedding. Boy was a he a douche, and it's a good thing we don't see him much in the story. Time to expunge the memories of Scott by going to Vegas with your girl friends, and best friend brother, what could go wrong. The answer is everything. Instead of being married to Scott who she has been with for 10 years, she married to Eli, her best friends brother. If that wasn't enough, he can't even say the word marriage. Oh it gets better, when Marlee gets cutoff, because her parents believe she's spiraling out of control. There were worst things to do, but hey Eli would be a downgrade from Scotty in their book.

As we read in the story, we see Marlee and Eli making their way in their marriage before they can finalize their divorce. It's a lot of fun to these two become closer, and start to fall in love.

The great thing about Take It Off the Menu is you don't have read them in order. Yes, it's part of the series, but it can be read as a stand alone. Take a chance on Marlee and Eli as they go through life trying to figure out how they are going to survive their marriage for 90 days. Maybe in end they might  realize they actually love each enough to stay together.

Christina Hovland lives her own version of a fairy tale—an artisan chocolatier by day and romance writer by night. Born in Colorado, Christina received a degree in journalism from Colorado State University. Before opening her chocolate company, Christina’s career spanned from the television newsroom to managing an award-winning public relations firm. She’s a recovering overachiever and perfectionist with a love of cupcakes and dinner she doesn’t have to cook herself. A 2017 Golden Heart® finalist, she lives in Colorado with her first-boyfriend-turned-husband, four children, and the sweetest dog around.