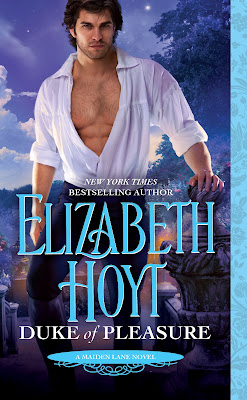 IN THE ARMS OF DANGER

Bold. Brave. Brutally handsome. Hugh Fitzroy, the Duke of Kyle, is the king's secret weapon. Sent to defeat the notorious Lords of Chaos, he is ambushed in a London alley-and rescued by an unlikely ally: a masked stranger with the unmistakable curves of a woman.

IN THE HEAT OF DESIRE

Cocky. Clever. Courageously independent. Alf has survived on the perilous streets of St. Giles by disguising her sex. By day she is a boy, dealing in information and secrets. By night she's the notorious Ghost of St. Giles, a masked vigilante. But as she saves Hugh from assassins, she finds herself succumbing to temptation . . .

ONE KISS WILL CHANGE THEIR LIVES FOREVER

When Hugh hires Alf to investigate the Lords of Chaos, her worlds collide. Once Hugh realizes that the boy and the Ghost are the same, will Alf find the courage to become the woman she needs to be-before the Lords of Chaos destroy them both?


Hugh Fitzroy is nothing like Val. Hugh is broody and trying to do his job. However, when he encounters Alf who isn't like any boy he has ever met. Well, Alf isn't like any boy, because she's not. To top it all off, she's also the Ghost of St. Giles. WHAT! He's a girl.

Anyway, we watch these two dance around one another. I mean by day Alf is trying to help Hugh catch the Lords of Chaos, and by night she's still helping Hugh catch them, but Hugh knows the Ghost is a girl. Boy does it start to unwind as Hugh realize that Alf is kind of the girl of his dreams.

Boy these two have chemistry. Their banter is fun. She acts so cocky and he's so staid. They balance one another out. Poor Hugh he's not sure about his feelings through most of the book, but one thing is certain he wants Alf, the question is how badly he wants her.

Overall, Duke of Pleasure is a pretty good read. Hugh was able to get a true happy ending, but now I need to know what is going to happen to Lady Jordan. Blast it I have until August to wait. The agony. 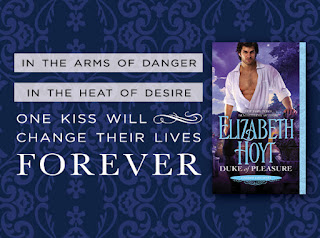 Elizabeth Hoyt is the New York Times bestselling author of over seventeen lush historical romances including the Maiden Lane series. Publishers Weekly has called her writing "mesmerizing." She also pens deliciously fun contemporary romances under the name Julia Harper. Elizabeth lives in Minneapolis, Minnesota, with three untrained dogs, a garden in constant need of weeding, and the long-suffering Mr. Hoyt. 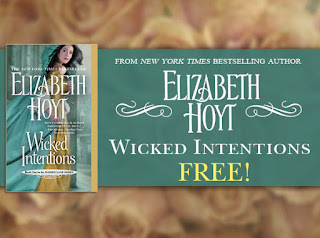 WICKED INTENTIONS is now FREE for a limited time!

The ebook edition of WICKED INTENTIONS, the first book in Elizabeth Hoyt’s bestselling Maiden Lane series will be FREE from November 28 through December 12!  This is a great opportunity to introduce friends to the series! On December 13 the price returns to $5.99.