Forever Romance Spotlight + Excerpt: In Bed with the Bodyguard by Lynne Silver

In Bed With The Bodyguard
Alpha Heroes, 2
Lynne Silver
Forever Yours
October 13, 2015 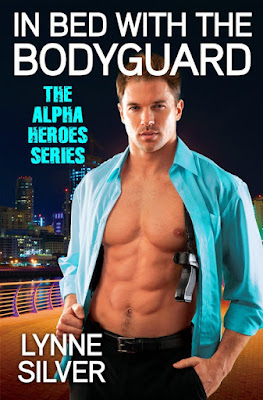 About IN BED WITH THE BODYGUARD
Gallery owner Arianna Rose's life is picture-perfect-until her father is accused of running a massive Ponzi scheme and skips town. The media quickly casts Washington, DC's sweetheart as America's most hated heiress. After the police ignore a violent attack on her home, Ari has only one place left to turn . . . Taking a bullet for the president made Secret Service agent Lance Brown a national hero. His sexy smile and action-star body made him a national sex symbol. And his devotion to protecting the innocent makes him the man in charge of guarding Arianna Rose. She denies her role in her father's crimes, but neither she nor Lance can deny the heat building between them. Together they play a dangerous game . . . only it's not criminal-it's carnal.

Excerpt from In Bed With The Bodyguard:
Ari rolled onto her side for the millionth time that night. She wondered if Lance was having any more luck sleeping on the couch. She didn’t think so if the noises emanating from his side of the room were any indication.
Oh God, his thigh. She should have thought more about his injury. How in the world would a six foot two man sleep on her small sofa, especially with a bum leg, He probably needed to stretch it out.
This was ridiculous; she was not getting any sleep tonight. If Lance weren’t here, she’d give up, flip on the lights and head to the potter’s wheel. A one second brain flash of her as Demi Moore and Lance as Patrick Swayze entered into her mind but she shook it off as the one AM crazies.
“Lance,” she whispered. “Lance.”
“Hmmm?” A male grumble rose from the couch.
“Are you awake?”
“Sorta.”
“Switch places with me.”
“What? Why?” He sat up.
“I can’t sleep knowing I put an injured man on the couch. An injured tall man.” She struggled to see his face in the dark, but could only make out shadows of his form.
“I’m fine. Go back to sleep.”
“No.” She hopped off the bed taking her pillow with her.
“Arianna, I won’t be able to sleep knowing I kicked a beautiful woman out of bed in her own apartment.”
He’d called her beautiful. She shouldn’t let his words shouldn’t warm her insides, but still, his compliment brought a smile to her lips. “Oh, I know. We can share the bed.” She turned back and crawled under the covers, her stomach jumping at the thought of Lance in her bed. Not that anything was going to happen. Well, nothing much. She wouldn’t be completely opposed to a little snuggle or if their feet brushed against each other.
“Hell no.” His refusal came way too quickly for her liking.
“Why not? Will your girlfriend be jealous? It’ll be purely platonic. Bring some of those blankets over here and roll them down the center of the bed. Problem solved.”
“I don’t have a girlfriend, but I...”
“Tempted? I promise to keep my hands off you,” she said, smiling that he didn’t have a girlfriend and knowing she’d have to sleep on her hands and have at least ten blankets dividing them to keep from rolling into his welcoming masculine heat. She’d already revised her opinion that he was a jerk. Lance was proving to be way more superhero than jerk. His willingness to stay and protect her went a long way toward softening her resistance to him.
“Will it shut you up?” He stood off the couch. Each of his footsteps coming closer mimicked the pounding of her heartbeat.
“Yep.” She scooted close to the edge of the bed and lay back down. When his weight sank one side of the mattress, she rolled then scooted back to the side. His warmth seeped through offering her a comfort she hadn’t felt in ten months since her nightmare began. It would be so easy to inch closer, and let her hands wander over his body, but she reminded herself he’d bolt if she got bold. He’d made it clear he was fighting the attraction between them. Silly man. Why not take what she was offering? Then she froze and wondered what exactly she was offering. She was off relationships and Lance wasn’t a one-night stand kind of guy. Looked like she’d be sharing a bed with a man and not having sex; a first.
It seemed she’d just shut her eyes when the sun blasted through her windows waking her up. She sat up with a jolt and heard a noise coming from the bathroom. Sounded like someone was in her…shower? What kind of criminal broke in to shower in someone’s home? Then it all came flooding back. Her dad, the gallery vandal, the sexy man who’d spent the night in her bed. She nearly laughed. Never had a man ever slept over and nothing happened, not even a good-night kiss. What a waste. Lance was hot, and he was in her shower. Naked. She should probably go see if he needed shampoo or his back scrubbed. It was the charitable thing to do.
Before she could act on her impulse, the shower stopped and silence fell as Lance stepped out of the bathroom, white towel wrapped low on his hips. His tousled hair fell in all directions, dripping water down his muscular chest only lightly dusted with light brown hair. He had a full six pack of abs that spoke to his dedication to staying in shape for his job, and he had those total sexy hip lines going on.
Ari swallowed hard as he offered her a small uneven smile.
“Morning. I was hoping to be dressed by the time you woke up. I’ll grab my clothes and head back in there to change.”
“Don’t bother on my account.” Her lust amped up at his appearance, and made her voice take on a throaty, breathy quality.

About Lynne Silver
Romance author, Lynne Silver, writes the popular Coded for Love series and other hot contemporary romance novels, such as Love, Technically.  Before writing romance, she wrote fiction of a different sort, drafting press releases for technology corporations. Washington DC is her home (non) state, where she resides with her husband and two sons.